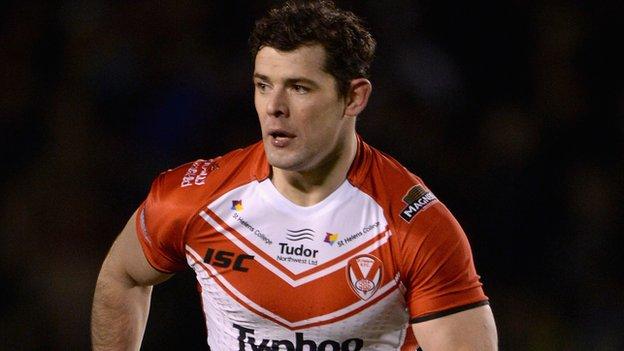 Paul Wellens opened the scoring and Sia Soliola and Lance Hohaia also crossed, with Luke Walsh kicking the extras, to put Saints 16-0 ahead at the break.

Niall Evalds eventually got points on the board for Salford, but Gary Wheeler added a fourth try for Saints.

Walsh then kicked two penalties and Wellens crossed for his second try, before Gareth Hock grabbed a late consolation for the visitors.

Saints were able to take poll position in the table thanks to Leeds Rhinos' surprise 24-6 defeat by fifth-place Warrington.

But the result at Langtree Park heaped more misery on the Red Devils, who have now won just once in eight games since replacing Brian Noble as coach with Iestyn Harris.

After a scrappy opening quarter, it was Wellens who went over first - the veteran full-back receiving a glorious pass from Walsh, who had capitalised on an error from Salford full-back Greg Eden.

The Red Devils were then cut open in defence as Mark Flanagan weaved his way through a number of tackles before Soliola touched down from close range.

Walsh landed his first conversion and moments later was kicking another after Hohaia crossed for Saints' third before the break.

Harris' side made a positive start to the second half and got off the mark when Evalds pounced on a Rangi Chase kick, and Tim Smith duly converted.

But their fightback did not last long as Wellens' chip found Wheeler, who raced in for a fourth Saints try.

Two more goals from Walsh put the hosts further ahead before Wellens capped an outstanding display by finishing off a sweeping move on the right.

Salford showed some quality in their second try, piecing together a good move for Hock to cross, but although Smith converted, it was too little too late.

St Helens assistant coach Keiron Cunningham: "It has been quite funny listening to people taking about this crisis we are in.

"We were second and competing for first. It is laughable but we just get our heads down.

"We work hard on the training field and we go out and play as tough as we can, and hopefully we get the results."

Salford coach Iestyn Harris: "The team are just learning to do a million things right in a game, which ultimately will give you the end performance.

"We are just not concentrating consistently enough. We will get there but it is a lot of work to do.

"I'm frustrated to be losing games. I am not a good loser and I don't expect my players to be good losers.

"But we have changed one hell of a lot of structure and the players are buying into it."