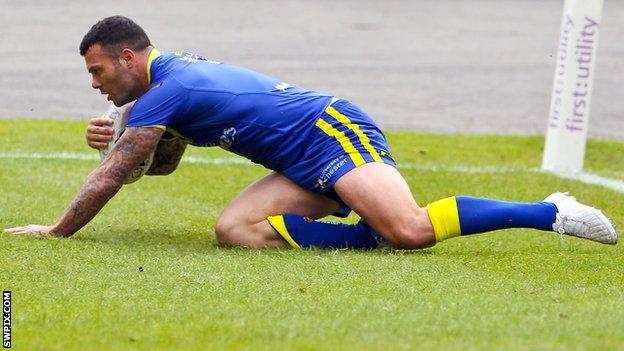 Two tries for Bridge before the break and one from Chris Hill, plus three conversions, helped the hosts open up an 18-point half-time lead.

But Joel Monaghan's try was the icing on the cake as Warrington wrapped up a fourth straight win.

Leeds lost top spot in the Super League table as second-placed St Helens leapfrogged them with victory over Salford.

Carl Ablett thought he had scored the game's first try when he twisted his way through the Warrington defence, but it was ruled out by the video referee after he failed to ground the ball.

The hosts grew stronger as the half went on and Michael Monaghan created the space for Bridge to dummy his way over, who then added the extras.

A terrific break from Richie Myler, who skipped away from the Leeds defence, set up Hill for the home side's second try and Bridge kicked his second successful conversion to pass the 1,000 points milestone.

Warrington had a try disallowed for a knock-on but the hosts did not let it affect them and, with the Leeds defence all at sea, Myler sent free Bridge for his 100th try, whose kick saw the hosts lead 18-0 at the interval.

Rhys Evans became the second Warrington player to be denied by the video referee when he was adjudged to be in touch as he went over in the corner and a knock-on earlier in the play then saw a Stefan Ratchford try disallowed.

Bridge successfully landed a penalty to extend Warrington's lead, but Leeds finally got on the board when Leuluai crashed over and Sinfield kicked the extras.

Joel Monaghan dived over on the right-hand side for Warrington's fourth try and Bridge missing the target for the first time in the game did not matter, as the hosts coasted to victory.

"It was a really good effort. We have defended with less missed tackles before and scored bigger points than that, but in terms of effort and commitment to one another and commitment to the cause, that was our best display.

"We knew we were up against a team who are fantastic at preventing tries being scored. Their full-back, Zak Hardaker, is the best in the competition.

"We knew we had to be equally committed and I thought we were outstanding in terms of covering for each other."

"I felt Warrington played far too fast and with too much intent for us.

"We didn't have enough intent during that game and they exposed some of our defensive intent."