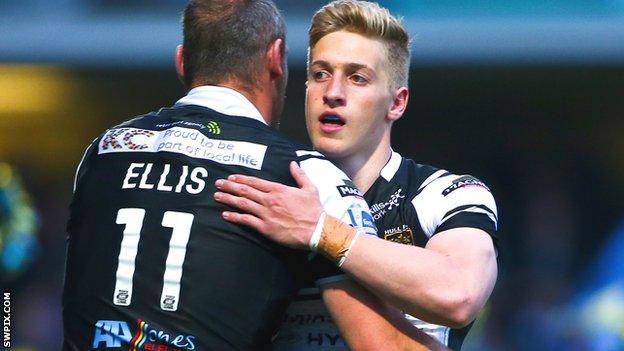 Broncos had Scott Moore sent off just before the break for a hit on Lancaster but replied through Mason Caton-Brown.

Hull, who remain 10th in Super League, beat London 40-4 at the KC Stadium five weeks ago but arrived at The Hive on the back of four straight defeats.

And they were on the back foot within six minutes as Greenwood charged down Rankin's clearing kick to score.

Ellis cantered over to draw the Black and Whites level before 17-year-old Lancaster, in only his second senior appearance for the club, took a pass from Kirk Yeaman to score.

London were pinned back by a string of penalties and Westerman capitalised to score from close range, before Shaul raced in at the corner after a flowing handling move involving Ben Crooks and Yeaman.

Moore was then shown a red card just before the interval but London started the second half at a high tempo and were rewarded when Caton-Brown powered over after a short pass from George Griffin.

It took Hull until midway through the half to score again when Liam Watts broke the London defensive line and offloaded for Danny Houghton to cruise over.

Their sixth try arrived when Westerman shrugged off weak Broncos tackling to stride over, before Lancaster also earned himself a brace when Yeaman's pass gave him a free run to the corner.

Rankin and Talanoa scored late on to add the gloss and condemn the winless Broncos to a 15th successive Super League defeat this season.

"I'm really pleased for Callum. He is still really raw, but physically he is in great shape and can get better.

"He has pace to burn and the more we can get him in space the better for us.

"Everything today was really based around getting the win. It was ugly at times, but when we got in the groove we looked good."

"Scott is an aggressive player, but not a malicious one, so I shall have to look at the red card again.

"We were hit by injuries during the game and the truth is we just did not have the troops. We ran out of interchanges and it was just a case of filling places.

"Attitude is not losing us games - it is the inexperience. But if we continue to run hard and tackle hard, our luck will change."