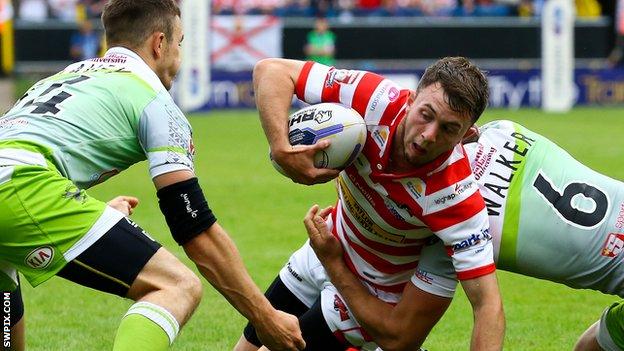 Leigh Centurions coach Paul Rowley says the Championship leaders will not ease up after setting a new club record of 15 consecutive victories on Sunday.

They set a new mark with a 54-12 win at Sheffield Eagles and are seven points clear at the top of the table.

"It's a feeling of contentment," Rowley told BBC Radio Manchester.

"We want to keep making this record even more difficult to beat for teams of the future. We won't drop our shoulders. We'll still be as intense."

Leigh have won all 12 of their Championship fixtures in 2014 and also progressed through three rounds of the Challenge Cup.

Rowley's side, one of two second-tier teams still left in the draw, will meet Super League leaders Leeds Rhinos at Headingley in their quarter-final on 6 June.

"We want to make sure we get the result we're looking for at Workington [on Sunday] and then we've got the welcome distraction of the mighty Leeds," added Rowley, who represented England at the 2000 World Cup.

"They're riding high at the top and it's something to look forward to."