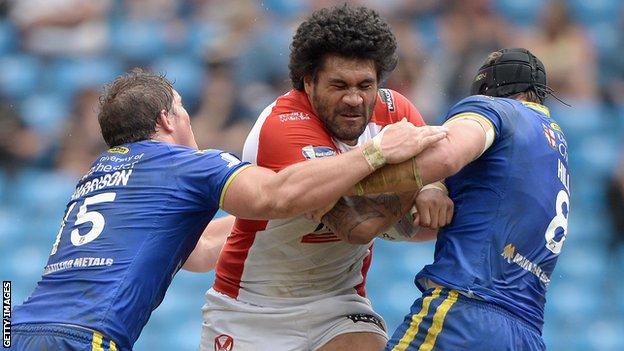 St Helens prop Mose Masoe says he "underestimated" the strength of Super League, which may have affected his early performances for the club.

Masoe joined from NRL club Penrith Panthers ahead of the 2014 season.

But he missed the first month of the campaign with an ankle ligament problem he suffered while playing for Samoa at the World Cup last year.

"I think I underestimated how tough the competition was going to be over here at first," said the 25-year-old.

He told BBC Radio Merseyside: "My mindset wasn't in the first couple of games. I was just thinking that I just had to do my job, do my hit-ups and do my tackles.

"But it's more than that. You've got to show passion and commitment to your team."

Masoe, who scored one of his side's seven tries in Friday's impressive win over Huddersfield, added: "It was good to show people what I can do as a player."

Coach Nathan Brown said recently that Masoe's injury could have contributed to his quiet start at Saints, but believed he was coming to terms with the English game.

Brown's side won their first eight league fixtures to top the table in mid-April, but have lost three of their last six games to lie a point behind leaders Leeds Rhinos.

On Friday, they host a Salford side containing two ex-Saints players and Samoa internationals in Francis Meli and Tony Puletua.

"They're a physical side with some big boys," said Masoe. "They're about to turn their season around and hopefully it's not against us."