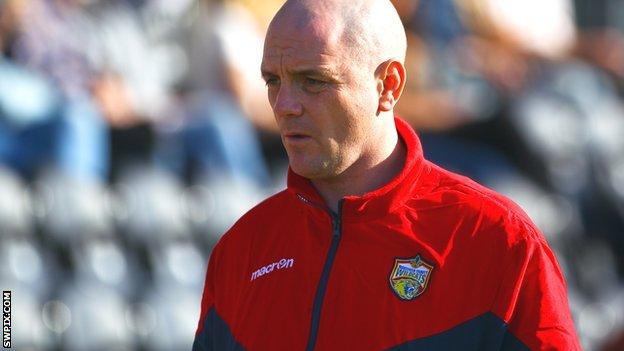 Agar joined the Wildcats before the 2012 season after a three-and-a-half-year spell as Hull FC coach.

He led the side to the Super League play-offs in his first season, but they have won only four games this term and lost to struggling Bradford on Sunday.

Webster, 34, will lead the side for the first time against winless London Broncos on Friday, 13 June.

Wildcats chairman Michael Carter told the club website: "I'd like to thank Richard for all he has done for this club. Reaching the play-offs in 2012, given where the club was when he arrived, was a remarkable achievement and gave the fans some terrific memories.

"Throughout all of the tribulations the club has endured during his tenure, he has handled himself with superb dignity and worked tirelessly for the cause.

"We fully respect his decision to move on and all parties were in agreement that the timing was right for James Webster to take charge."

Webster assisted Agar, who coached France at last year's World Cup, throughout his time at Wakefield, having previously worked under him for a period at Hull FC.

"I would like to thank Michael and the board for giving me the opportunity to coach Wakefield Trinity, a club steeped in tradition," said Webster.

"Everyone at the club knew this would be a difficult year with some hurdles to overcome but we've set some goals and if we are successful in reaching them then I believe the club will be in a much stronger position going forward."

The former Hull KR, Paramatta Eels and Widnes player's first objective will be to steer the club away from the Super League relegation zone.

Sunday's defeat by the Bulls meant the Odsal side are now just six points behind the Wildcats and the deficit could be wiped out if their appeal against their points deduction on Wednesday is successful.