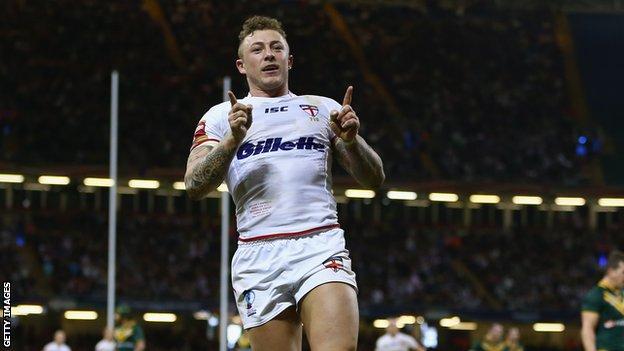 Wigan Warriors and England winger Josh Charnley could turn out for Workington in the Championship as he continues his recovery from a knee injury.

Charnley, Super League's leading try-scorer in each of the past two seasons, has been out of action for two months.

The Warriors have a dual-registration agreement with Workington and coach Shaun Wane says it could be utilised to help the 22-year-old back to fitness.

"They're our link-up club and it's the same with anyone else," he said.

Wane told BBC Radio Manchester: "If I think they need some match-fitness, that's where they're going to go."

Wigan have previously sent some of their promising youngsters on loan to Workington, who currently lie 10th in the second tier, to give them first-team experience.

In 2013, Wigan Warriors winger Josh Charnley became the first player to score 40 tries in a season during the Super League era.

His 43rd try of the season helped Wigan to Grand Final victory over Warrington at Old Trafford.

Charnley, who represented England at the 2013 World Cup, is closing in on a return after being hurt in a Challenge Cup tie at Dewsbury in April.

He scored 36 tries in all competitions in 2012 and added a further 43 last year as Wigan won both the Challenge Cup and the Super League Grand Final.

But he was dropped from the side despite touching down twice for the Warriors in their World Club Challenge defeat by Sydney Roosters in February.

And Wane, who called on the winger to improve his performances, says it will be "hard work" for him to dislodge youngster Dom Manfredi from his starting line-up.

"Josh will get his chance, but he needs to grip it when he does and I'm not sure when that will be.

"The Josh of the past has scored some great tries and done some unbelievable things, and I remember that, but he needs to come in and do the tough stuff as well.

"There were deficiencies in Josh's game before he got injured so I need to make sure those problems have gone before he gets his chance with us."