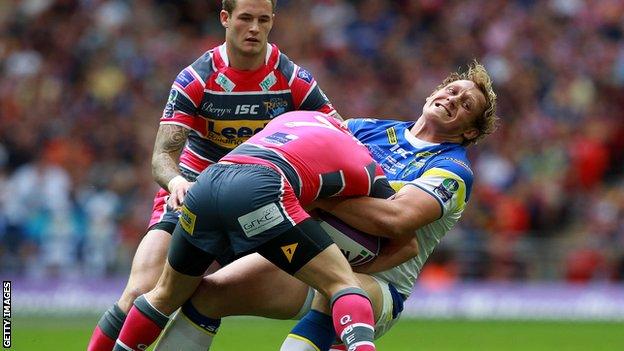 Leeds Rhinos will face Warrington Wolves in the Challenge Cup semi-finals, while Widnes Vikings have been drawn to face Castleford Tigers.

The tie between Leeds and Warrington is a repeat of the 2010 and 2012 finals, with the Wolves winning both.

Either Widnes or Castleford will end their long wait to return to Wembley.

The Vikings have not won the competition since 1984 and were last in the final in 1993, while Castleford were beaten in the 1992 final.

The two semi-final ties will be played during the weekend of 9/10 August, with the final staged at Wembley on Saturday, 23 August.

The Vikings, who were 56-6 winners over Keighley on Thursday, enjoyed an easier passage through than the Rhinos, who were severely tested by Leigh Centurions before eventually prevailing 25-12 at Headingley.

Daryl Powell's Castleford, who last won the trophy in 1986, defeated holders Wigan 16-4 on Saturday and Tony Smith's Warrington completed the semi-final line-up with a convincing 46-10 win at Bradford.