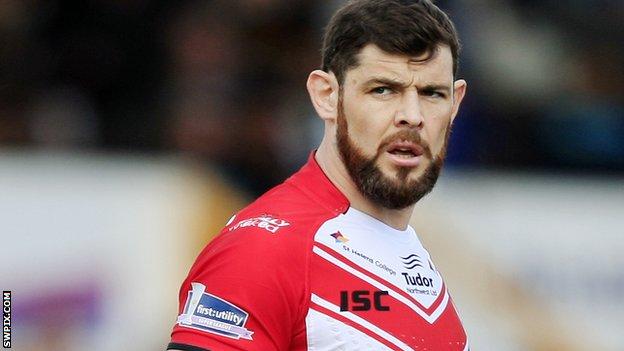 St Helens enjoyed a comfortable win over Castleford to leapfrog Wigan at the top of the Super League table.

Tommy Makinson and Jordan Turner also crossed for the hosts, with Kirk Dixon replying for the Tigers.

With Wigan losing at Wakefield, Saints climb back to the top of the table ahead of their meeting with the Warriors at the DW Stadium on Friday.

Mark Flanagan set up winger Makinson for his 15th Super League try of the season to give the hosts a perfect start, and although Dixon replied for the Tigers midway through the first period, St Helens took control with three more tries before the interval.

Wellens crossed twice and created the other for centre Turner to give Saints, hammered 42-0 by Catalan Dragons last time out, a 22-4 lead at half-time.

Percival and Walsh collected their own kicks to stretch the lead further and Flanagan turned provider again for Percival's second.

Castleford duo Sneyd and Dorn added some respectability to the scoreline in the final minutes, before Saints half-back Walsh kicked a late penalty to seal the win, taking his personal haul to 14 points.

"We're really happy. We surrendered a couple of tries at the end but as a whole for 70 or 75 minutes, I thought we were by far the dominant team.

"We haven't spoken to Paul [Wellens] about [a new contract] yet, but he's playing well and it's obviously a conversation that we'll be having shortly I'd imagine.

"With his performances and his durability and what he contributes to the club, it's obviously something we need to look at. The effect he has on his team-mates is even better than the way he plays."

"I thought we were pretty dumb to be honest. We were in the game and making line breaks consistently but we came up with some poor decisions on back of them.

"We didn't give ourselves chance to get into the game.

"St Helens were excellent. Luke Walsh was superb and put us under pressure with his kicking game but I thought we were pretty poor.

"There was a lack of energy and a lack of communication. It was one of those tough days at the office and we've two on the spin now and obviously questions get asked."