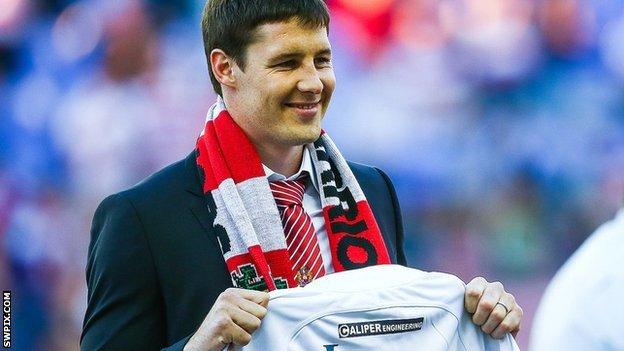 Dual-code international Joel Tomkins has returned to rugby league side Wigan Warriors after a three-year spell in rugby union with Saracens.

Tomkins joins the Super League champions with immediate effect for an undisclosed fee, signing a contract until the end of 2018.

He was presented to the crowd during the half-time interval of Wigan's 48-4 defeat of Widnes on Wednesday.

The 27-year-old played three Tests for the England rugby union side in 2013.

"I'd like to thank Saracens for the opportunity to try a different sport, a different lifestyle and also for assisting my development which allowed me to represent my country," Tomkins told Wigan's website.

"However, after a long thought-out process and at this stage in my life, I realised that the timing was right to come home.

"I am very grateful to Wigan Warriors for taking me back to the best rugby club in the world. It means everything to me to pull on the famous cherry and white jersey again."

Tomkins, who made his Wigan debut as an 18-year-old, joined Saracens at the end of the 2011 season, shortly after scoring a stunning try in the Challenge Cup final win over Leeds.

He is currently recovering from a back injury and is not expected to be fit for about four weeks.

His decision to return to rugby league is a boost for the sport, after England international Sam Burgess switched codes and agreed a move to Bath for next season.

Tomkins's younger brother Sam swapped Wigan for NRL side New Zealand Warriors at the end of last season, after helping the club to a Super League and Challenge Cup double.