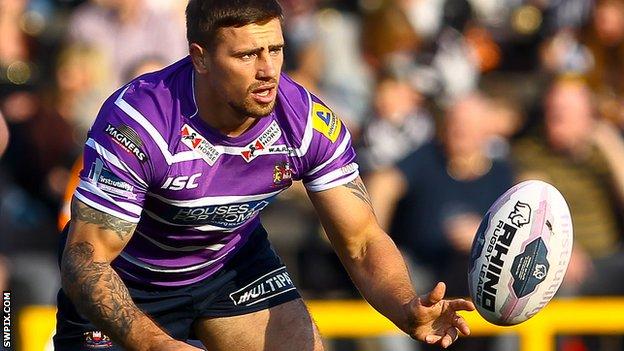 Wigan Warriors hooker Michael McIlorum has suffered a broken arm and will be out of action for around two months.

The England international, 26, was hurt in the closing stages of the midweek win against Widnes and missed Sunday's defeat at Wakefield which saw them lose top spot in the Super League table.

"He's the best hooker in the world for me and he's going to be a loss."

Captain Sean O'Loughlin also missed the 36-28 loss at Wakefield, although he is expected to be fit to face local rivals St Helens on Friday.

There's not a common theme to them - they're all random injuries

Defending champions Wigan have maintained a position near the top of the table for much of the season, despite being without a number of regular first-team players because of injury.

"I've never known a season like it," added Wane. "There's not a common theme to them - they're all random injuries.

"We were top of the competition, and when you consider we've had so many players out for so long, we're in a good position. Slowly but surely, those players will be coming back."

Meanwhile, Warriors second-rower Liam Farrell is facing the threat of suspension and could miss Friday's game after being charged by the Rugby Football League for a Grade B lifting offence in the match against Wakefield.

Centre Anthony Gelling could face punishment for Grade A punching, while Bradford player-coach Matt Diskin and Hull KR's Neville Costigan have both been charged with Grade A striking.

All four players have the option to enter early guilty pleas.