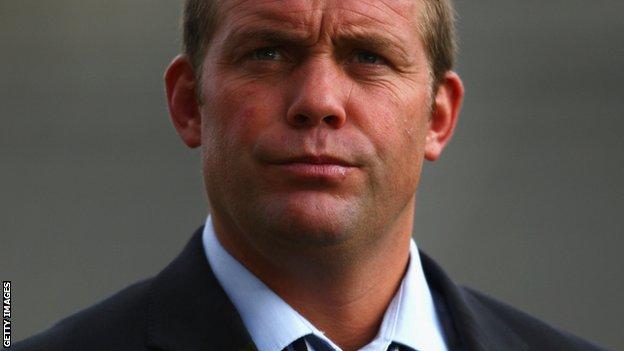 Player-coach Bobbie Goulding has said he is prepared to overhaul the Barrow Raiders squad regardless of whether they retain their Championship status this season or not.

Barrow, who are bottom after Sunday's defeat by Swinton, are 12 points behind Whitehaven in ninth with 10 games left.

The bottom five clubs in the 14-team division will be relegated this season.

Teams in bold are in the relegation places.

"There are some players just not good enough for Championship rugby," Goulding told BBC Radio Cumbria.

"If players want to be here then they have to be better than that.

"We know what is going to happen, we know the budget and we need to work out what positions we need - there are a few."

Goulding was appointed to replace Anthony Murray, who left the club in March, and although the Raiders have failed to climb to safety so far, there have been signs of improvement with wins against Batley and Rochdale.

"I've had the reassurance I'm going to stay at the club, which I'm really pleased about," Goulding added.

"Players are looking for contracts and they have to go out there and earn one.

"We've only got three or four players signed on now for next term."