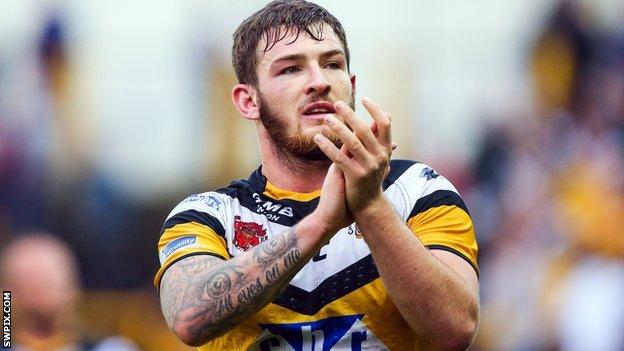 Daryl Clark scored his first hat-trick as Castleford moved to within two points of top spot in Super League with a comfortable win at Widnes.

Luke Dorn, Oliver Holmes and Daryl Clark scored in the first 12 minutes, and Michael Shenton touched down after Widnes tries for Paddy Flynn and Danny Galea as Cas led 22-12 at the break.

But hooker Clark, 21, scored either side of another try from Shenton.

Victory was Castleford's second over Widnes this season, and the sides meet again in next month's Challenge Cup semi-final.

Marc Sneyd kicked all but one of his seven conversion attempts for Cas to cap a polished performance in the week he announced a move to Hull for 2015.

Widnes complained at referee Phil Bentham's decision to disallow a second try for Ah Van on 56 minutes when the home side were trailing 22-16 - and could have gone level.

Victory moved Cas up to third in the table despite Chris Dean's late consolation try for Widnes.

"I didn't see the Patrick Ah Van try on the TV but I'd have to go with the linesman. Robert Hicks was in a good position and he's there to make those decisions. I don't think it was a try.

"We handled it poorly at the start. We wanted to do things on the front foot and they were smart. We were chasing 18 points before we knew what we were doing. Once we got in the game, it was an even contest.

"You'd have to put Daryl Clark up there with the best on his form this year. It's hard to go beyond the experience and mental toughness of James Roby and Michael McIlorum but he's really doing a job there."

"Daryl Clark's got ability, pace, strength and toughness. He's the perfect rugby league player. He's got that bit of class about him that can trouble the Australians. They don't know much about him.

"I didn't see if the Ah Van try was offside. I didn't see the replays but I thought it was a try and that it would level the game up. It would have been interesting then to see which team could wrestle the advantage.

"We're not quite on our game at the moment. But credit to Widnes, who really came after us physically and rattled us in the middle of the field. It was a good battle there."