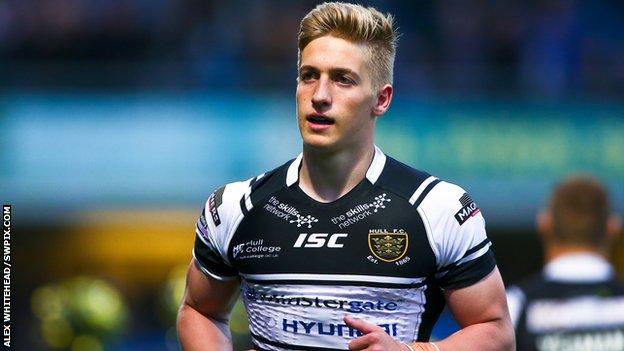 Warrington won their ninth match in a row despite a hat-trick from Hull's Callum Lancaster at the KC Stadium.

The Wolves led 12-8 at the break, Chris Bridge converting tries from Stefan Ratchford and Ryan Atkins after Lancaster touched down for the hosts.

Winger Gene Ormsby clinched the Wire's victory, but there was still time for Lancaster to complete his hat-trick.

That took his try tally to eight in five matches.

The visitors took a slender lead into the break with a late try, but it was the home side who had opened the scoring courtesy of two of their academy products.

Hull kept out the in-form Wolves until the half-hour mark, when Ratchford crossed, taking the final pass from Joel Monaghan after a barnstorming run from Matty Russell.

A Joe Westerman penalty handed the Black and Whites a two-point lead before Atkins latched onto Ratchford's kick to score under the posts with the last play of the half, Bridge converting.

In the second half, Bridge extended the Wire's lead with an early penalty, and some great defensive work from Russell denied Gareth Ellis from cutting the deficit as he looked certain to score.

Ellis made amends almost immediately, feeding Lancaster a perfectly-timed pass for the young winger to race clear for his second try, although Westerman failed with the conversion attempt.

Warrington hit back through Harrison, who crashed under the posts to give Bridge an easy kick and, when Ormsby crossed in the corner following good work from Monaghan, the game looked won.

Lancaster went over to complete his hat-trick late on, but Warrington held on to win.

"I thought we were terrific. Hull had a right dig and the conditions, the environment and a hostile crowd made it a tough old game but I thought my players handled it well.

"I thought our defence in the first half was awesome, as good as I've seen this year probably.

"What a try in those conditions, Matty Russell's contribution was enormous and then he comes up with another enormous play to force the ball from Gaz Ellis when it looked for all the money like a try - they were two terrific plays."

"It's frustrating but it was an outstanding performance, we turn up every week and have a crack but we just don't have that craft we need to take the points.

"We needed to win to push for the eight and we were playing top-four opposition in front of a big crowd and unfortunately we came up just short.

"Callum Lancaster can finish, there is no doubt about that, we're going to work on his back field and his general skill needs improving but he can score."