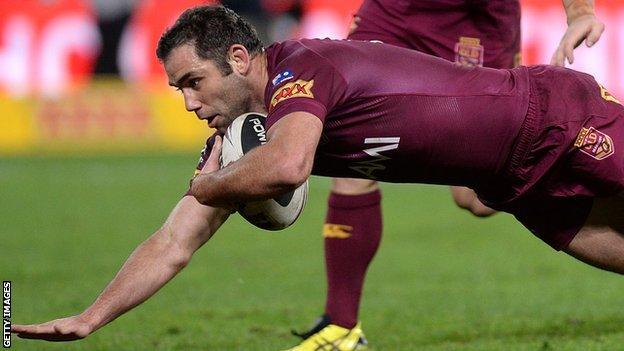 Queensland spoiled New South Wales' State of Origin celebrations with a win in front of the Maroons' support, but still lost the 2014 series 2-1.

Blues were already assured of the Shield with wins in games one and two but came unstuck in Brisbane.

Although the series had already been lost, the prospect of their fiercest rivals being presented with the Origin shield in their own backyard inspired Queensland, who came out fighting in game three.

Cronk's comeback from a broken arm gave the Maroons a lift after two straight defeats and the Melbourne playmaker slotted straight into the side alongside long-term representative team-mates Smith, Thurston and Slater.

They began at pace with Greg Inglis causing numerous problems down the left, and James McManus and Jarryd Hayne were forced into desperate defence to keep him out.

Hodkinson gave the Blues the lead against the run of play when he kicked for two after Ben Te'o caught him high, but the lead was eventually overhauled when Maroon pressure told.

Daly Cherry-Evans, on off the bench, caught out the tiring Blues defence with a scything run and his weighted kick was pounced on by Smith to ease the Maroons three minutes before the break.

There was no change in momentum after the break with Slater cutting his way through the Blue traffic for a second Maroons score, and only a huge tackle stopped Thurston from scoring a further try on the last.

Thurston edged Queensland further in front from the tee after a tackle from Greg Bird on club team-mate Nate Myles took him over the horizontal, before Dugan kept the game alive when he scampered across the stripe for a Blues try.

It proved a false dawn as Boyd's score on the back of a sliding right-to-left move, a Guerra four-pointer and a score for the returning Cronk wrapped up the win to restore some Queensland pride.