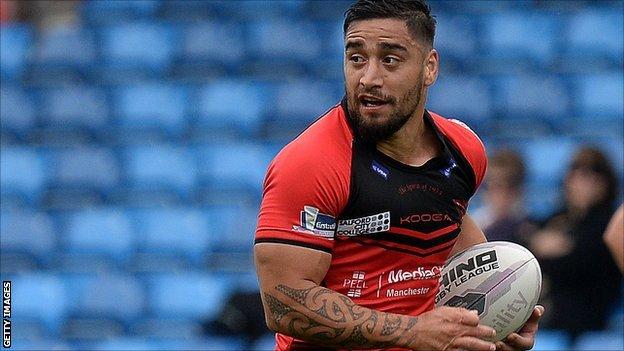 Salford led 13-0 at the break with Chase scoring a try and a drop goal, with Mason Caton-Brown also crossing and Josh Griffin adding two goals.

Chase's grubber allowed Griffin to cross but Hull came firing back with tries from Dean Hadley and Kirk Yeaman.

Greg Johnson went over in the corner and Darrell Griffin crossed but Yeaman and Jamie Shaul reduced the deficit, before Caton-Brown made it safe.

Salford's victory, which means that London Broncos will be relegated if they lose at Warrington on Sunday, keeps alive their outside chances of a top-eight finish.

The last 30 minutes wasn't good enough for us. We fell in love with ourselves a little bit and started to cut a few corners

Chase scored the first try of the game, swooping onto a careless offload by Hull forward Liam Watts and sprinting 80 metres for an opportunist score, and created the second for Caton-Brown with a superb delayed pass.

Griffin kicked one conversion and extended his side's lead with a penalty while Chase made it 13-0 with a drop goal on the stroke of half-time. Josh Griffin touched down Chase's kick to the corner and the winger added the touchline conversion to make it 19-0.

Danny Houghton put second rower Hadley through a gap for one try and, after re-gathering possession courtesy of a neat chip over the Salford defence, repeated the act to get centre Yeaman over three minutes later.

Jordan Rankin converted the second try after Joe Westerman had been off target with his attempt and the deficit was down to nine points. But Salford went upfield and secured the victory with the aid of two tries in four minutes.

Niall Evalds superbly drew two defenders to get Johnson over at the corner before prop Darrell Griffin took Tommy Lee's pass to cross by the posts.

Brother Josh kicked his fourth goal but Hull finished with a flourish, with Yeaman going over for his second try and centre Fetuli Talanoa carving out a long-range effort for full-back Shaul, with Rankin adding both conversions.

That meant the gap was down to just seven points but Caton-Brown swooped on a loose ball to spring 40 metres for his second try and Chase wrapped up the scoring with the conversion.

"We're building a reputation here as a physical team that is prepared to work for each other and I thought for 50 minutes we improved that reputation.

"But the last 30 minutes wasn't good enough for us. We fell in love with ourselves a little bit and started to cut a few corners, which is not acceptable. We've lost an opportunity here.

"We're all desperate to get into the play-offs but we're seven games away from that."

Hull FC coach Lee Radford: "I'm used to the frustration. It's the same every week. We have a dig but unfortunately we're not quite there. We need to turn these battling performances into a result.

"They had a real physical period in the first half. They are aggressive in what they do, sitting ball players on their arses, and they got away with a lot. There were some positives out there.

"We had 10 kids out there who have come through the youth structure and that's pleasing. It's a great learning curve for them and I'm sure will gain from the experience."