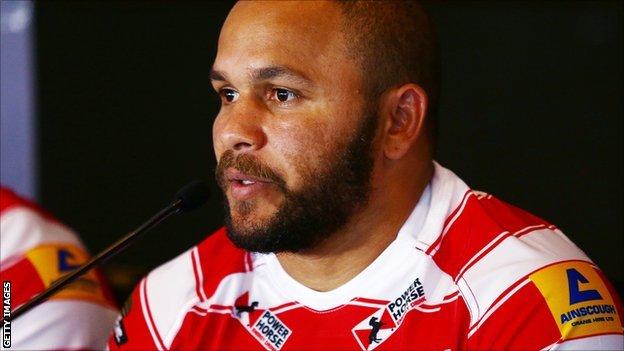 Warriors led 24-10 at half-time with two tries from Matt Bowen and one apiece for Tony Clubb and Josh Charnley, with Catalans pair Morgan Escare and Elliott Whitehead crossing.

The visitors added to their lead with Scott Taylor and Joe Burgess both crossing, while Matty Smith added five points with the boot.

Wigan became only the second side to travel to Perpignan and win in 2014, and were convincing victors in the end.

A tight first half saw the lead change hands after Clubb opened the scoring with an 11th-minute try under the posts, converted by Smith.

Two tries in quick succession for Escare and Whitehead had Catalan 10-6 in front after 22 minutes.

A piece of quick-thinking from Wigan's Bowen enabled him to burst through the opposition defence and over the line for a converted try.

Charnley extended the margin to 18-10 with his 11th try in his past five games, and then had a hand in Bowen's second try of the game. Smith converted both tries for a 24-10 half-time lead.

A string penalties at the start of the second half disrupted the game, as Catalan had both Jason Baitieri and Benjamin Garcia sin-binned.

Wigan extended their lead with further converted tries from Taylor and Burgess under the posts.

"I thought we went about our business really well, and very professionally.

"The players reacted this week and really looked after themselves, and that came out in their performance today.

"We continued to make good yards in the middle and that was the most pleasing thing. We're in a good place today."

"I told the boys they had a dig and worked pretty hard but we lacked some composure and some patience with the ball and defensively our principles let us down, especially at the end of the first half.

"It's pretty frustrating to get the result we did tonight after the performances we have put out on the field over the last few weeks.

"There was an element of ill-discipline from our part given the penalty count against us. We spoke about wanting to be aggressive but there is a line that you can't cross. Unfortunately we crossed that tonight."