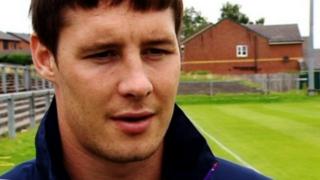 Rugby league is in my blood - Tomkins

Dual-code international Joel Tomkins tells BBC's Super League Show he was compelled to return to Wigan Warriors because "rugby league is in my blood".

The 27-year-old, who moved back to the DW Stadium from Premiership rugby union side Saracens in June, featured for Wigan for the first time since 2011 in their 45-5 Super League win against Salford Red Devils.

You can see highlights from Tomkins' return and every try from every round on the Super League Show, which is available on the BBC iPlayer.