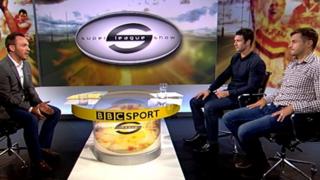 The last tie between Leeds Rhinos and Warrington is a repeat of the 2010 and 2012 finals, with the Wolves winning both.

Either Widnes or Castleford will end their long wait to return to Wembley.

The Vikings have not won the competition since 1984 and were last in the final in 1993, while Castleford were beaten in the 1992 final.

You can watch Warrington Wolves host Leeds Rhinos on BBC One from 14:00 BST on Saturday and Castleford Tigers take on Widnes Vikings on BBC Two starting at 14:30 BST.