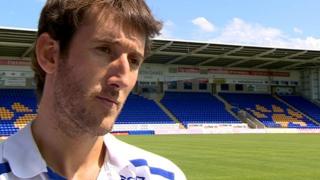 Stefan Ratchford tells BBC North West Tonight that Warrington Wolves want to banish the "dejection" of last season's Challenge Cup semi-final defeat by Hull when they face Leeds Rhinos at the same stage of the competition on Saturday.

Warrington narrowly lost last year, but utility man Ratchford says that will drive the Wolves as they look to secure a fourth Wembley appearance in the space of six seasons on Saturday.