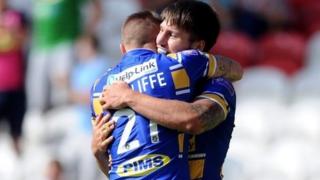 Leeds through to Challenge Cup final

Leeds Rhinos booked their Wembley place with a 24-16 win over Warrington Wolves in the Challenge Cup semi-final.

Two tries from winger Ryan Hall put them ahead before Warrington dragged themselves back into the game with efforts from Chris Bridge, Stefan Ratchford and Ben Westwood.

However, further tries from Joel Moon and Tom Briscoe sealed the win for the Rhinos, who will now play the winner of Sunday's match between Widnes and Castleford. The final will be played at Wembley on 23 August.