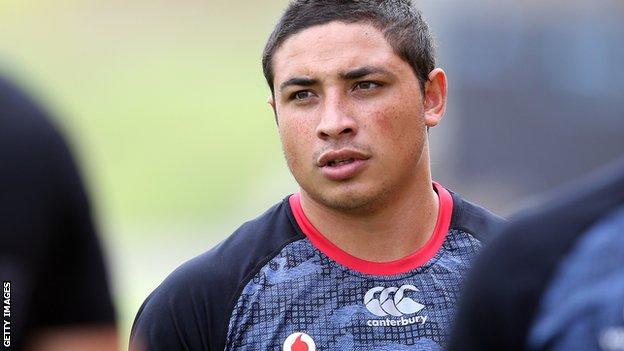 Salford kept alive their slim play-off hopes with a win over Catalan Dragons.

Despite falling behind to an early try from Michael Oldfield, Salford led 22-4 at half time after crossing four times.

Kevin Locke scored two and landed three kicks with the other tries coming from Junior Sau and Niall Evalds.

Greg Mounis added one for Catalan before Theo Fages and Tony Puletua stretched Salford's lead, while Vincent Duport and Ian Henderson scored late on for the Dragons.

Henderson's try came in his 100th appearance while Thomas Bosc added three conversions for the French visitors, including his 500th goal for the club, but they were overpowered by the hosts.

Salford had fit-again full-back Locke to thank for their victory, in what was only his third appearance since signing from New Zealand Warriors.

The result sees Salford move up to 10th in Super League, three points off Catalan and Widnes, who occupy seventh and eighth place.

Iestyn Harris' side have three games remaining and must win all of them and hope results go their way if they are to make the play-offs.

"Our attacking play is starting to come and we are starting to get some variation in our play.

"The players have had a tough two weeks, we've dominated for long periods and are happy with the two points.

"The guys will need some down time now and hopefully come back and get six from six. The most important thing is to finish in the right way. We are starting to develop as a side.

"If we win the last three we will have won seven of our last nine which is pretty good.

"If that brings us a top-eight place then that's super but we are looking ahead further than that."

"Our first-half performance was very poor.

"For 15 or 20 minutes we did not defend as a team or work hard enough.

"We showed how good we can be at times in the second half but they were better than us.

"Rangi was very good and could try whatever he wanted and he had success. When he is on fire he is hard to stop and we just watched him. Louis Anderson and Ben Pomeroy were good for us but we need more consistency."