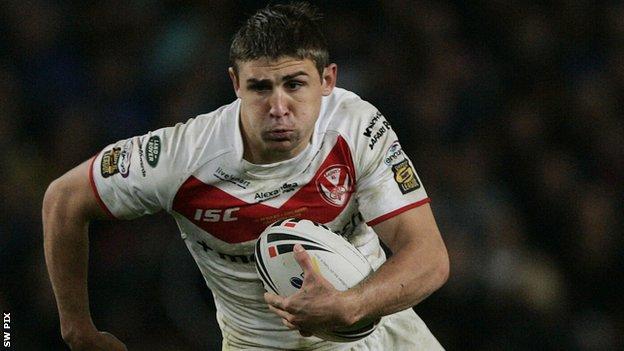 St Helens beat Wakefield to move three points clear at the top of the table.

The two sides were only separated by six points at the break but the hosts showed their prowess in a convincing second-half.

Danny Washbrook, Lee Gilmour and Richard Owen went over for Wakefield but their efforts were not enough.

Saints took an early lead when Mark Percival, who kicked six conversions, dabbed through for Makinson to touch down.

Despite dominating possession, the Super League leaders had to wait until the half-hour mark to cross again, when Paul Wellens sent centre Jones over for his first of the game.

Trinity enjoyed a a late flourish just before the break, and a close-range score from Washbrook and Jarrod Sammut's goal made it 12-6.

But Saints reacted quickly in the second half, and a super break and kick-chase from Percival sent full-back McDonnell over for his debut try.

The visitors hit back again as Owen out-jumped Matty Dawson to touch down, but Saints were not ready to lie down.

Soliola forced his way through from close range and McDonnell bagged his second of the night.

Jones also went on to add his second, and although Gilmour grabbed a late consolation against his former club, Makinson gave Saints the last score and his 24th try of the Super League campaign.

St Helens coach Nathan Brown: "I thought the boys did a super job given we had to change people around and the positions they were in.

"We lost Robes with a really nasty gash in his leg for half a game and Gary Wheeler for a spell and they are positions where we have injuries at the minute.

"On top of that, Wakefield have picked up some big scalps in recent weeks so I have nothing but positive views on that.

"Tonight was a good start for us and now we have two weeks to prepare for Leeds."

Wildcats boss James Webster said: "I thought we tried really hard but we were up against it given the size and power of their team across the park. Their weight of possession, size and power hurt us at the end of the game.

"Full credit to St Helens for the way they played - they had to play a different style of footy because they have no half backs, but when you stack power like that it is hard to compete against.

"We have no problems scoring points but it took us 30 minutes to get on their try line."