It is a conundrum that not even accountancy student team-mate and Rubik's Cube expert Ryan Hall could solve: How has Leeds Rhinos skipper Kevin Sinfield failed to get his hands on the Challenge Cup?

'Sir Kev' - a tag with which he has been unofficially bestowed at Headingley for his 17 years of service - has hoisted the Super League trophy six times and World Club Challenge three, and captained England to a World Cup semi-final at Wembley.

But, despite winning the Lance Todd Trophy for a man-of-the-match performance against Hull in 2005, the Challenge Cup, the oldest and most prestigious trophy in the domestic game, has always eluded him.

The 33-year-old has played in five of Leeds' six losing finals since they last won the trophy in 1999 but could end that unwelcome record when he leads the Rhinos out against West Yorkshire rivals Castleford Tigers. 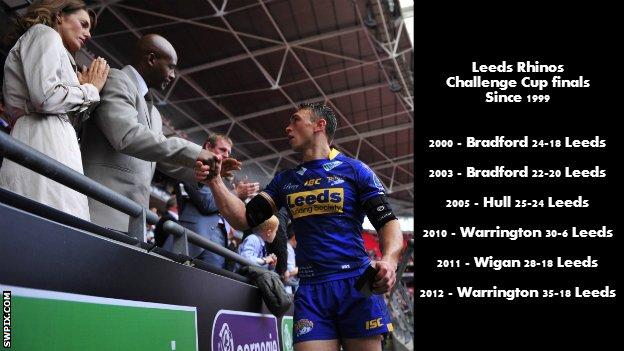 "We've put a lot of focus on this over the last 10 years: we don't have a bad record apart from the finals," Sinfield told BBC Radio Leeds.

"Everybody focuses on the fact we haven't won one for a long time and justifiably so, so we're desperate to win."

Fellow Leeds stalwarts such as Jamie Jones-Buchanan, Ryan Bailey and Danny McGuire have also missed out on the prize, while Jamie Peacock - the only playing winner in the squad - collected both medals against Leeds with Bradford in 2000 and 2003.

With that in mind, you could forgive the Rhinos squad if they had a sense of trepidation but Sinfield says the mindset is far more positive.

"People think you can often clam up with anxiety when things haven't gone the way you'd like in finals, but we look forward to this," he said.

"We're excited by this week and I feel very fortunate to have played at Wembley. People would give their right arm to get there and to get another shot is really special."

A suspension for headbutting Luke Dorn - an offence which earned Sinfield the first red card of a senior career which started with his debut in 1997 - in the league meeting with Castleford last month looked as though it might deny him the chance to end his wait.

But an early guilty plea ensured he returned in time for the semi-final against Warrington and took the chance to lead the Rhinos to yet another final.

"It's never something I take for granted. I know it could all end tomorrow so I've enjoyed every single one although they haven't all gone to plan," he said.

"Leeds is a special club. To have been here all my career is great and to be able to lead the side out in some big games in front of our fantastic supporters is incredible."

Rhinos' 1999 winners - the club's last crop to win the prize - had a similar barren run stretching back to 1978 hanging over their heads before they demolished a spirited London Broncos at the old Wembley.

The class of 2014 will face a Castleford side regarded as slight underdogs but Sinfield said the two teams are in a similar situation.

"Both sides will feel some nerves, will want to do really well and get off to a good start," he said.

"We've certainly got some players who turn up and play well in big games. Hopefully we can tap into some of that. I'm sure Castleford have as well.

"They've haven't been in this situation for a number of years and they fully deserve it this time."

Castleford coach Daryl Powell was part of Leeds' 1999 Cup-winning side and roomed with the emerging Sinfield while at Headingley.

"Kev was pretty calm and assured from a very young man," Powell said. "He also made a good cup of tea!

"He was a good player with a lot of ability and skill. His kicking is great and his temperament is solid, so you could see he would have what it took to move forward."

The absence of a Challenge Cup winner's medal as a member of the playing squad would be a surprise for a player who has experienced far more of rugby league's highs than lows but the player himself said his career would not be defined by the result of Saturday's game.

"Having a couple of kids puts things into perspective and I recently did a day working for prostate cancer and heard what people have to go through," he said.

"I certainly don't feel that my career is a failure if I don't win this trophy. I'd love to get a winner's medal, but if it's not to be I feel fortunate.

"A wise old man said to me 'the greatest medals are your kids' and over the last few years I've understood what that means."