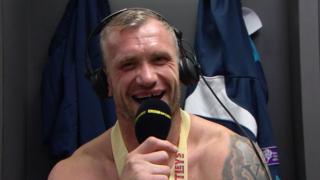 Winger Ryan Hall powered his way over for two tries as the Rhinos broke a cup hoodoo that saw them lose seven finals since 2000.

Rhinos captain Kevin Sinfield added three successful conversions as he finally got to lift the cup after five previous failures as skipper.