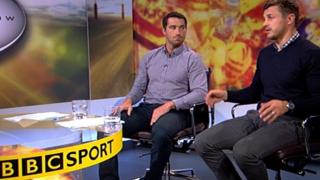 St Helens forward Jon Wilkin and Wigan Warriors scrum-half Matty Smith speak to BBC's Super League Show about the importance of the World Club Challenge, which will be expanded in 2015.

Smith said he felt Wigan were shown "a lack of respect" when they travelled to Australia this year to face last season's National Rugby League champions Sydney Roosters.

Wilkin also talks about making British Lions tours a regular fixture on the international calendar again, while Smith adds his voice to calls to have Wigan captain Sean O'Loughlin named as the next England skipper following Kevin Sinfield's decision to retire from the international game.