The domestic rugby league season begins on Thursday, with 12 clubs all hoping to be crowned Super League champions in October.

Are you a huge fan counting down the hours to your team's opening game? Or never seen the sport before and fancy something new?

A reputation to rebuild?

Rugby league was catapulted into the sporting spotlight following Super League's Grand Final in October. Sadly, it was for the wrong reasons.

Ben Flower's two punches on Lance Hohaia - the second while the St Helens man was lying defenceless on the Old Trafford turf - resulted in a huge public outcry and calls for strong punishment.

Flower has since apologised and is keen to move on from the incident, as are rugby league fans and administrators, but it remains to be seen if the episode will have a long-term effect on the sport and its appeal to a wider audience.

A new structure for Super League

The licensing system has gone, and promotion and relegation are back.

There are three divisions - Super League, the Championship and League One. The top two divisions of 12 teams will split into three groups of eight in July, based on their league positions after 23 games. The top eight clubs are guaranteed to be in Super League the following season.

After a further seven league fixtures in the "Super Eights" stage, the leading four clubs in the top group will contest the play-off semi-finals, with the two winners meeting in the Grand Final.

Congratulations if you understood all of that. But wait, there's more...

The eight teams in the second tier of the "Super Eights" will also play seven fixtures when the leagues split.

The top three clubs will be guaranteed a place in Super League the following season, while the bottom three will be consigned to a year in the Championship.

The sides placed fourth and fifth will contest a play-off match, dubbed "The Million Pound Game", to determine which team will claim the last of the 12 Super League spots for the following campaign.

The Super League Show returns to BBC One for a 17th series on Monday, 9 February. Every week throughout the season, Tanya Arnold will present extensive highlights from every Super League game.

All commentaries, including those provided by BBC local radio, will be available on the BBC Sport website. 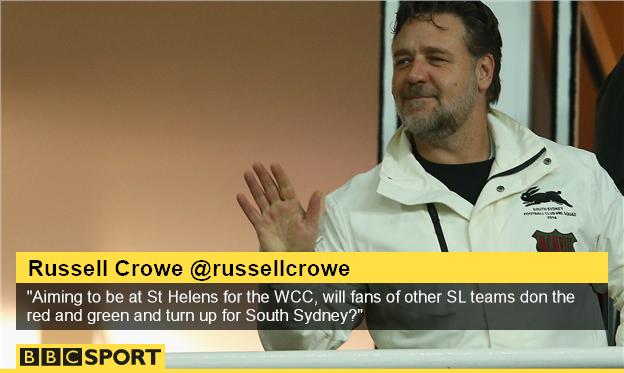 The annual World Club Challenge between the champions of England and Australia has been expanded and six teams - three from each nation - will compete in the World Club Series.

Sam Burgess inspired Souths to NRL Grand Final victory in his final game before joining rugby union side Bath, despite the forward fracturing his cheekbone and eye socket in a collision with England international team-mate James Graham 10 seconds into the match.

Oscar-winning actor Russell Crowe is a part-owner of the Rabbitohs and hopes to watch his side against St Helens on 22 February.

Hopefully he got his ticket in advance - the game is already a sell-out, with a crowd of around 18,000 expected at Langtree Park.

To find out if the people of St Helens witness a lesser-spotted Crowe, as well as details of the action on the field, follow live text commentary of all three World Club Series matches on the BBC Sport website.

A new home for Magic Weekend

After three successful years in Manchester, Newcastle's St James' Park will host Magic Weekend for the first time in 2015.

The concept of staging a full round of fixtures in one venue over two days has proved a popular one with rugby league supporters ever since its introduction in 2007. Nearly 65,000 people attended when it was staged at Manchester City's Etihad Stadium last year.

Rivalries are often played out during the annual event and it will be no exception during the weekend of 30-31 May.

The drama of the Challenge Cup

Rugby league's oldest cup competition has provided some memorable moments over the years since the first final back in 1897.

Martin Offiah's dazzling try against Leeds, Sheffield Eagles' shock win over all-conquering Wigan or Don Fox's missed conversion from in front of the posts - poor lad - all have a rightful place in Challenge Cup folklore.

Leeds are the current holders after ending their 15-year wait to lift the trophy by overcoming Castleford 23-10 at Wembley last August.

Massive shocks are rare, but there is nearly always drama.

BBC Sport will again be televising the Challenge Cup in 2015, screening seven live matches, including the final on 29 August.

Warrington, so often the nearly men in Super League, have added Fiji international Ashton Sims to their forward pack as they attempt to win their first league title since 1955.

After a year in the NRL with Sydney Roosters, France prop Remi Casty has returned to Catalan Dragons, who have also signed controversial but immensely-talented Australian half-back Todd Carney, while Terry Campese - nephew of Australian rugby union legend David - is among the new additions at Hull Kingston Rovers.

The Championship can boast some eye-catching newcomers too. Fuifui Moimoi and Reni Maitua, two stalwarts of the NRL competition in Australia, have signed for Leigh and Featherstone respectively.

All change for the champions

Not many incumbent managers have statues of themselves outside their club's stadium, but that is true of Keiron Cunningham, who has taken over as head coach of St Helens ahead of the 2015 season.

Saints claimed two of the three major prizes on offer in 2014, including their first Grand Final win since 2006, to give outgoing head coach Nathan Brown the perfect send-off before he returned to Australia.

Cunningham appeared almost 500 times for St Helens as a player and won numerous honours, earning him legendary status and a statue outside their Langtree Park home.

He has already named a new captain, with long-serving forward Jon Wilkin replacing experienced full-back Paul Wellens in the role. 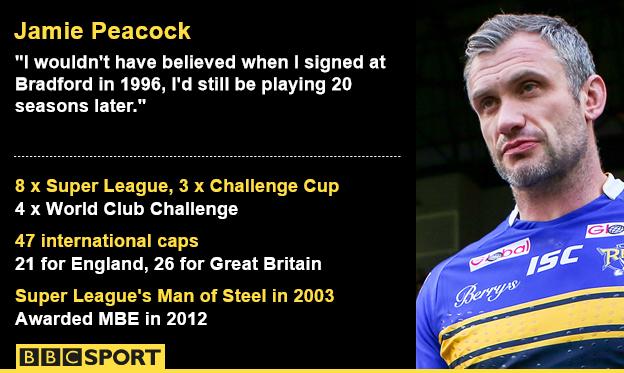 Jamie Peacock, one of the legends of the domestic game, is to retire from rugby league at the end of the 2015 season.

Even at the age of 37, the Leeds Rhinos prop remains a respected and formidable opponent, exemplified by a record 10th selection in Super League's Dream Team last year.

International failures with England and Great Britain still haunt Peacock, but few can match his honours at club level.

Thanks for the memories, Jamie. Enjoy one last hit-up, and then make the most of your well-deserved retirement.

The 2014 Four Nations proved to be another near miss for England.

A year on from their heartbreaking World Cup semi-final defeat by New Zealand, Steve McNamara's side impressed many with their performances but were beaten narrowly by both Australia and the Kiwis and failed to make the final.

It had been hoped that a Great Britain Lions team would tour down under at the end of the 2015 season but that plan never materialised.

Instead, England will host New Zealand in a three-match series at the conclusion of the Super League season, which offers the national side more valuable preparation time ahead of the 2017 World Cup.