The 2014 Super League Grand Final will probably be best remembered for Ben Flower's red card, rather than St Helens ending an eight-year wait for a domestic title.

After Wigan prop Flower was sent off for punching Lance Hohaia in the opening minutes, an offence for which he later received a six-month suspension, tries from Sia Soliola and Tommy Makinson helped Saints win rugby league's showpiece event for the first time since 2006.

Having lost five consecutive finals between 2007 and 2011, it was a long-awaited victory.

Club legend Keiron Cunningham has since replaced Nathan Brown as head coach, as Saints look to follow the success of a campaign in which they also won the League Leaders' Shield.

So what are the challenges facing Saints if they are to remain the best team in England?

Most people have to wait until they retire, or pass away, to be immortalised by a statue. Not Keiron Cunningham.

The 38-year-old's iconic status saw him win a public vote in 2007 and a bronze figure of him sits outside Langtree Park. 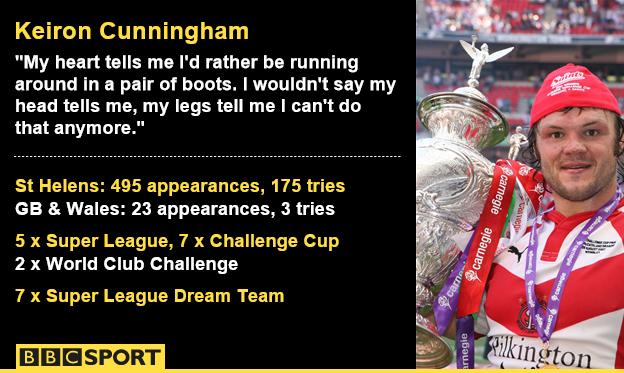 "It's really exciting and it's something that I've dreamed of," Cunningham told BBC Sport when asked about leading his hometown club into the new campaign.

"I've worked for four years under different coaches, earned my stripes and I think I'm ready for the job.

"I don't think there was a coach out there who wouldn't have taken the job. There's a great set of players, a great squad and a really good culture in the place."

As well as a new man at the helm, second-rower Jon Wilkin has replaced Paul Wellens as captain.

"Keiron's really relaxed and calm - he's very composed when he delivers anything to the guys," said England international Wilkin.

"He was a really smart player when he played the game and obviously that communication has helped his coaching.

"We've recruited Sean Long [as assistant coach] when maybe other clubs were not to keen to take him. Sean's more fiery and more emotional than Keiron."

Former Wales and Great Britain hooker Cunningham, nicknamed 'The General' during his playing days, takes charge for the first time on Friday when St Helens begin the defence of their title against Catalans Dragons.

With a new competition structure introduced this year, there will be a different format for Saints to navigate.

"It's going to be tough, whether you won the trophy last year or didn't win the trophy," added Cunningham.

"The way the competition is devised this year is made to make it tough. Every game counts. It's going to make some great viewing and hopefully this should springboard our competition."

If it's not broken, don't fix it

One of the most remarkable things about St Helens' run to the title last year was the number of serious injuries they had to deal with during their run-in.

Wilkin added: "I took a lot of enjoyment watching some young guys, who I've been involved with nurturing, go on and do something really special.

"This year, for me, is about proving the standards we set ourselves from last year."

Stand-off Travis Burns and forward Atelea Vea have been the only two arrivals into the squad during the winter, and that has meant more coaching than integration for the backroom staff.

"We've worked really hard with them and put a lot of things to them in this pre-season," continued Cunningham.

"The culture is already good at the club. It's not like I'm starting from scratch and the will to learn is really good."

As well as the new Super League format, the World Club Challenge has been expanded to six teams. The World Club Series will include three sides from England and three from Australia's National Rugby League.

St Helens face NRL Grand Final winners South Sydney Rabbitohs, of whom Russell Crowe is a part-owner, and the Hollywood actor hopes to be at Langtree Park to watch the game on 22 February.

"I think a lot of the fans are more excited about seeing Russell Crowe in a box than they are about watching the game," joked Cunningham. "But everyone is really, really excited.

"There's not going to be a better spectacle in St Helens than bringing South Sydney across to Langtree Park. It's probably one of the biggest events in rugby league history.

"I can't think off the top of my head of any bigger event that's been in the town. You can see the buzz in the town alone, everyone is really looking forward to getting involved in it."

Saints were last involved in 2007 when they beat Brisbane Broncos 18-14 in Bolton. Both Cunningham and Wilkin played in that match as they were crowned as the best club side in the world.

"If you look at rugby league as a sport, one thing we need to be doing is selling out the big matches and Saints have done that - it shows the appetite for this type of fixture," added Wilkin.

"We go into that fully aware of our responsibility as league champions, to not only put in a good performance in, but to show the wider sporting public what Super League has to offer."