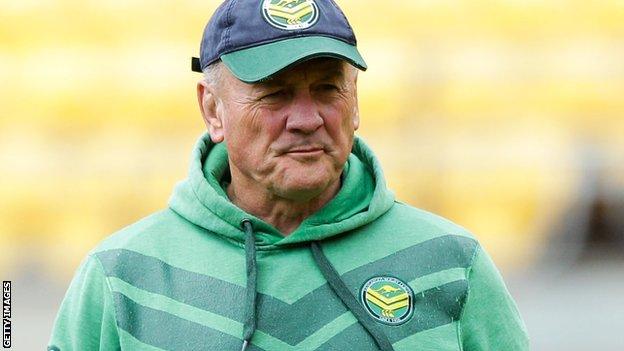 "A friend of mine [Sheens] will be visiting soon, to look around the club and give me his opinion," said Koukash.

"I'm not the most experienced person in rugby league - I've only been in the sport for three years - and sometimes I need extra help.

"That friend is Tim Sheens, who will visit me for three weeks and advise me on various bits and pieces and help put some systems and structures into the club."

Koukash bought Salford in January 2013, saving them from the threat of administration, and has reportedly spent up to £4m on new talent for the squad.

There had been speculation that multi-millionaire racehorse owner was considering leaving the club, or firing head coach Iestyn Harris, after he tweeted "I have had enough" following last Thursday's to Saints.

Asked about the tweet, Koukash responded: "I don't want to discuss that publicly.

"I discussed it with my boys. We had a great meeting and whatever was discussed in-house is going to stay private.

"I'm not walking out on the club, we're going to come out fighting.

"I'm going to work harder and if Iestyn wants additional resources he will have them at his disposal."