St Helens head coach Keiron Cunningham has said he is looking forward to the occasion of facing South Sydney Rabbitohs in the World Club Series.

Saints are competing in the newly-expanded competition for the first time since 2007, when they beat Brisbane.

"They're probably one of the best Souths sides that have ever existed," Cunningham told BBC Radio Merseyside.

"You've got those Burgess boys (George and Tom), Greg Inglis, great halves, they've got strike out wide - it's going to be good.

"I'm looking forward to seeing that Souths side walk out at Langtree Park; it's going to be a special moment for me as a coach." 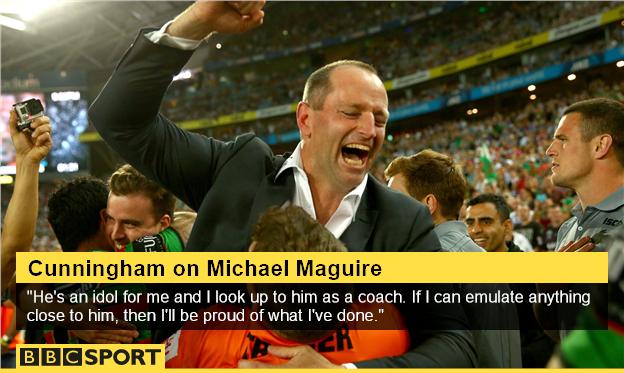 The Merseyside club have started the defence of their title well, winning their opening two Super League games - against Catalans and Salford.

Cunningham, in his first season as head coach after replacing Nathan Brown, was part of the Saints team that won the World Club Challenge in 2007, as was his assistant coach Sean Long - captain that night.

Oscar-winning actor Russell Crowe is a part-owner of the Rabbitohs and is expected to be amongst the sell-out Langtree Park crowd on Sunday.

Cunningham's team take on the Rabbitohs in the first year of the expanded six-team format, kicking off with Warrington versus St George-Illawarra on Friday, before Saturday's meeting between Wigan and Brisbane Broncos.

"It's sort of been at the back of everybody's mind for the last couple of weeks and all credit to the players as they've gone about things," added Cunningham.

"There have been two great performances for me leading up to this and we're looking forward to it.

"It's a really special event and it is great to do it with the six teams involved - I think its a really good spectacle worldwide."