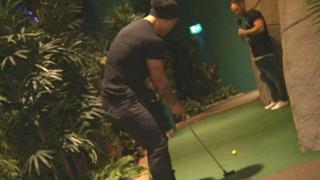 Castleford Tigers playmakers Ben Roberts and Luke Gale tell BBC's Super League Show how a round of adventure golf can help them forge an on-field partnership.

The pair have linked up just once so far this season for a Tigers side that is still searching for its first Super League win of 2015.