Leeds Rhinos maintained their perfect start to the Super League season as a stunning second-half display and 43 unanswered points saw off Hull FC.

Their 100% record was under threat when Hull's Leon Pryce crossed twice in the first half to reach 200 career tries.

But seven Leeds tries after half-time, with two each for Danny McGuire and Rob Burrow, sealed a fourth straight win and sent the Rhinos top of the table.

Brian McDermott's side won at the KC Stadium for the first time since 2011, although they rarely looked like ending their losing streak at the home of the Black and Whites before their clinical second-half showing.

Trailing 12-0 at the interval, prop Singleton provided the initial inspiration for Leeds, his break from deep creating an easy score for McGuire 40 seconds after the restart, before McGuire returned the favour by sending the 22-year-old over from close range.

England international centre Watkins raced 40 metres to set up McGuire, who was making his 350th appearance for Leeds, for his second to put the Rhinos in front. 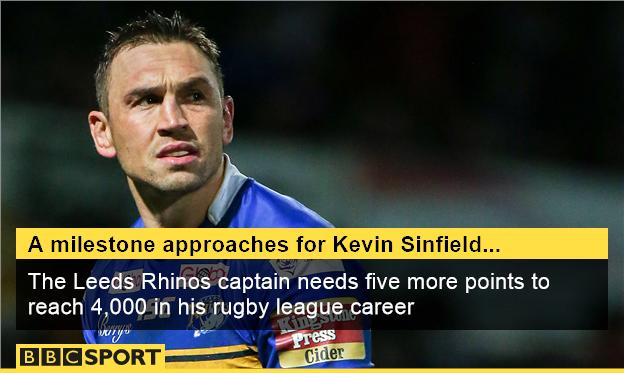 And after the impressive Watkins outpaced the Hull defence to score himself, veteran prop Leuluai darted over from five metres out to settle the contest.

Burrow reached 150 Super League tries with two opportunist efforts, latching onto his own chipped kick to complete the scoring in the closing seconds.

Captain Kevin Sinfield kicked all seven goals and also landed a late drop-goal, his 15-point haul leaving him five points short of 4,000 in his career and taking him up to fourth in the list of rugby league's all-time leading scorers.

Hull, who recalled Steve Michaels six days after the centre was linked to a drugs scandal in his native Australia, had enjoyed long spells in Leeds territory early on and established a 12-point lead in the first 25 minutes.

Tom Lineham had an effort ruled out for offside, but the hosts eventually extended their advantage through experienced half-back Pryce, who spun away from a Jamie Jones-Buchanan tackle to reach his personal milestone.

However, Hull had no answer to the second-half Leeds onslaught and Lee Radford's side remain without a win since the opening weekend of the season.

"We didn't have a bench. We had a full-back playing at nine and we had to give a kid [Jansin Turgut] a debut when someone [Liam Watts] pulled out in the warm-up.

"I was panicking because I didn't know if we had time to make the change. We ran out of numbers. Gareth Ellis wouldn't have normally played but he put his hand up.

"The first half was really pleasing, defensively the energy we showed was really good but we ran out of gas, simple as that.

"It was smart by them. They saved their interchanges for the second half. They knew we were patched up and they went for our jugular."

"Hull are almost unplayable when they are like that and we were waiting for the momentum to change, which didn't happen in the first half.

"They didn't make too many errors but, at the same time I didn't think we were miles behind - that's what the players spoke about at half-time.

"We certainly needed to change one or two things but it was never an attitude change. Once we were on the front foot, we were going to score some decent tries."