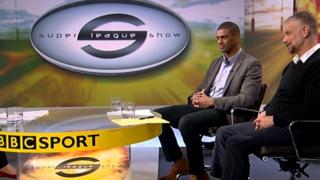 Noble is joined by Hull FC half-back Leon Pryce as they discuss the unblemished form of leaders Leeds Rhinos and champions St Helens and the pressure on sides to produce results earlier this term.

The action starts at the John Smith's Stadium on Thursday as Huddersfield and Castleford meet, having both won their first games of the season last week.

Leeds travel to Warrington on Friday, while Widnes entertain Saints and Pryce's Black and Whites take on a Wigan Warriors side that have lost three games in a row in all competitions.

Fourth-placed Catalans Dragons make the trip from France to face bottom side Hull KR on Sunday, while Salford Red Devils are up against Wakefield Trinity Wildcats.