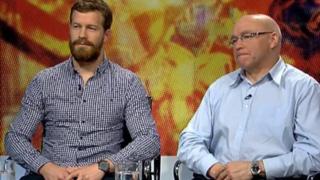 Catalans Dragons half-back Scott Dureau and John Kear - the coach of Wales and Batley Bulldogs - discuss the future of rugby league in France and Wales, and the strength of the international game on BBC's Super League Show.

David Collier was appointed chief executive of the Rugby League International Federation last week, with a brief to expand the game worldwide.

With Catalans now in their 10th season in Super League, Dureau believes the game in France is progressing but more needs to be done to encourage its growth.