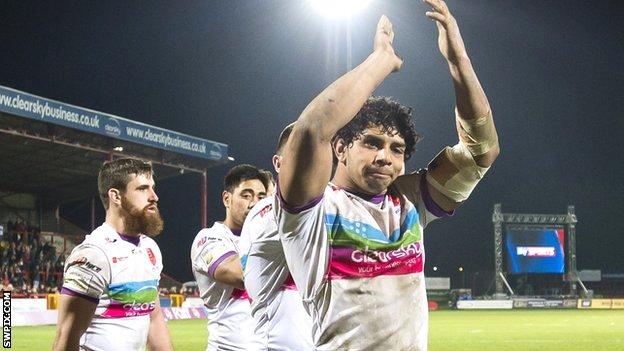 St Helens' perfect start to the Super League season was ended as Albert Kelly inspired Hull KR to a dramatic victory with a superb brace.

Ken Sio then pounced on a loose ball to put the hosts 16-12 up at the break.

Hull KR were boosted before kick-off by the news that former England and Great Britain prop Jamie Peacock will join the club as football manager once he retires from playing at the end of the season, but seemed lucky not to be a man down early following a shoulder charge by James Green on former Rovers half-back Burns.

However, an unlucky bounce of the ball on the hosts' try line allowed Saints to take the lead on three minutes.

Wilkin, who started his Super League career with Rovers, saw an attempted grubber kick rebound off the leg of a defender and back into his hands before darting over the line.

Kelly hit back for the hosts with two superb tries on the counter-attack, first collecting the ball deep in defence to race more than 90 metres to touch down, before then intercepting a pass close to his line to produce a similarly-impressive score.

Rovers' inability to deal with a high Wilkin kick allowed Makinson space to exploit out wide, sidestepping the attention of two defenders to cross over.

Saints lost hooker James Roby to a head knock soon afterwards and the home side began to take control thereafter.

Sio was quickest to pounce on a loose ball to restore Rovers' lead in the final minute of the first half, touching down after Adam Swift failed to take a towering kick from Terry Campese.

Mantellato, who failed to convert Sio's score and missed an early second-half penalty, went close to adding a remarkable fourth try for Rovers in the corner, only for the video referee to deny the Italy international as he acrobatically touched the ball down just on the line.

Kelly threatened to complete his hat-trick by finishing off another fine counter attack, which started with Dixon on his own line, but the move finished with Mantellato slotting a penalty from distance.

Saints then piled the pressure on with three successive sets of six, but Rovers stubbornly resisted the defending Super League champions before Mantellato landed his second penalty to open a eight-point lead on the hour.

McCarthy-Scarsbrook got on the end on a suspect-looking forward pass to set up a tense finish and while Turner was put through by Swift in the last minute, Burns failed to add the extras as Saints' surrendered their unblemished record in 2015.

"I'm ecstatic, it was a fantastic performance, a dominant performance. We spoke before the game about how everybody had written us off but people don't know the heart and the togetherness that this group has got.

"We need to be a little bit more composed when we're in front and our game management needs to be a little better. There were opportunities for the one point. But it was a magnificent win."

"If we had drawn it would have been a disservice to Chris Chester and his club because they were super in that second half. I thought Hull KR definitely deserved to win the game.

"We gifted them three tries but that's rugby league. Credit to my boys, they hung in there and kept believing and the two tries at the end made for an interesting finish.

"We had our chances, they took theirs and we didn't quite take ours. Our execution was poor tonight but Hull KR defended really well."