Oliver Holmes and Michael Shenton responded for Cas, but Cameron Phelps and Hanbury's second gave Widnes their biggest league win over the Tigers.

The Vikings had slipped to 11th after defeats by Catalan Dragons and Hull, while Castleford had claimed four wins in five matches.

Bu the hosts tore the Tigers apart to move up to ninth, in sight of the pivotal top eight places. 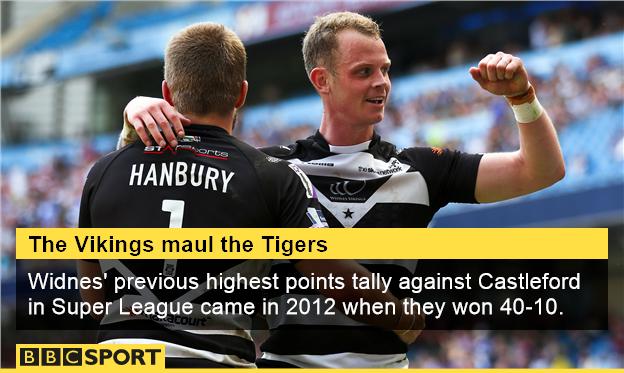 Ah Van opened Widnes' account by strolling over after five minutes, only for the Tigers to level through Ben Roberts, who sidestepped over and Liam Finn converted.

Widnes began to take hold and regained the lead thanks to Hanbury, who went over from Brown's pass, and Owens landed another touchline conversion.

Hanbury then turned provider when his long pass sent Owens racing over in the corner and he duly converted.

A fourth try from Marsh followed, and although Owens missed with the kick, Widnes made it 28-6 at the break with Ah Van breaking through an open Cas defence.

The Tigers' misery continued after the break when Widnes captain Brown exploited the gaps at the back to touchdown.

But they finally stopped the rot when an electrifying break by Adam Milner led to the ball being fed to Holmes, who twisted over from close range.

An exhilarating Hanbury run and precision kick set up a try for Phelps and took Widnes to the 40-point mark.

Cas responded through Shenton, who burst on to a Roberts pass, but it proved to be a mere consolation as Hanbury went over for the Vikings' eighth and final try.

"I was a bit apprehensive before the game because we've had a tough couple of weeks and Castleford had been going well.

"We had not been defending badly, we just needed to sharpen up and we did that.

"Joe Mellor pulled out before the kick-off after being sick all night but Tom Gilmore came in and did a fantastic job.

"Rhys Hanbury had been playing well this year but his confidence, like our team's, had been affected because he wasn't doing quite the things everyone expected.

"I am really disappointed because we came up against a team who wanted to win more than us.

"They had more energy, application and desire and we were second best all round.

"Kevin Brown was superb for Widnes but we lacked composure and intensity.

"It wasn't what you normally see from Castleford Tigers and we didn't perform."