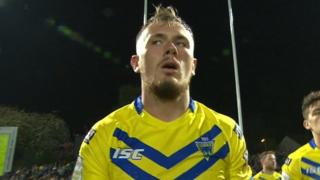 Warrington back-rower Ben Currie has proven himself one of the Wolves' biggest threats in 2015.

The 20-year-old impressed the BBC Super League Show pundits with his most recent display in the victory against Leeds Rhinos, with a try and an assist with the boot.

In total, the academy product has six tries in 12 games for Warrington - just two short of his season's best in 2014.