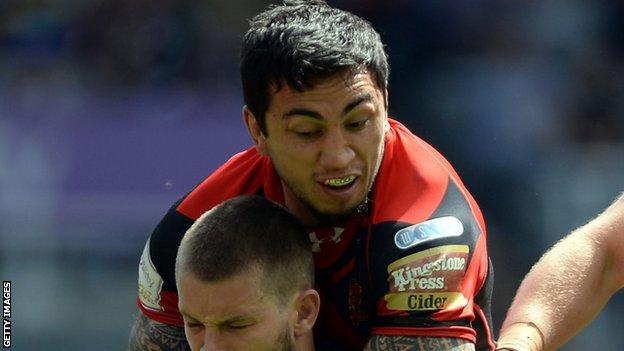 Salford ruined Brian Smith's first game in charge of Wakefield with victory in the battle of Super League's bottom two at Belle Vue.

Trinity replied through Dan Smith, Ian Kirke and captain Danny Kirmond, but have now lost 15 games in a row.

Any optimism generated by Smith's arrival as coach might have evaporated when Salford counter-attacked following a Jacob Miller knock on in sight of the line to score through scrum-half Fages.

However despite conceding a second try when Prop Taylor battered his way over from dummy half to further stun the Trinity faithful, the Wildcats remained competitive, and lock Dan Smith showed similar strength to finish off a sliding move and reduce the arrears.

Errors led to Salford's third try before half time as Tim Smith took too long to get the kick away, Cory Patterson charged down and back-rower Hansen skipped away to score unopposed.

Kirke's score to the left of the posts after the break gave Wakefield hope before Hansen slashed through the cover to pull Salford clear once again.

Chris Riley had a try chalked off to frustrate the home crowd and a Danny Kirmond touchdown was mere consolation as the visitors clung on.

"It was a hard-fought game. Our guys did a good job in terms of gritting their teeth and playing in what proved to be really tough conditions.

"We got significant improvement in our stick in the tackle - when we made contact with them we weren't bouncing away.

"There is still plenty to work on and there were still some disappointing aspects but by and large it was a solid improvement on last week."

"It was a massive banana skin against a team with a new coach so to get that win is really important for us going into the back end of the year.

"I thought we showed lot of resilience against a team we knew would turn up with lots of energy under their new coach.

"We knew it going to be a challenge for us but we always felt comfortable that we had enough in the game in the second half and defensively we were strong when we needed to be."