Hull KR skipper Terry Campese believes Castleford can play a big part in the final stages of the Super League season if they perform for 80 minutes.

The Tigers have been 18-0 up in the first 15 minutes of their last two games and gone on to record wins at Hull KR and Leeds Rhinos.

"If they can attack for the whole 80 then they will be a dangerous side," Campese told the Super League Show.

"They kind of go into their shell with 20 minutes to go and that was where we and Leeds came back into the game."

The Australian added: "I think they're a great team and the most impressive thing for me is that they're winning away from the Jungle."

The Tigers, who finished fourth last season and reached the Challenge Cup final, lost four of their first five Super League games this year but have now recorded victory in five of their last seven league matches.

Former Great Britain coach Brian Noble believes Castleford are reaping the benefits of being able to choose from a settled squad.

"Grant Millington and Andy Lynch are firing on all cylinders and Luke Gale has settled in," he said.

"They brought in nine or 10 players before the season and that takes time but once they've got the rhythm and form that Daryl wants them to play you can see they are an absolute threat." 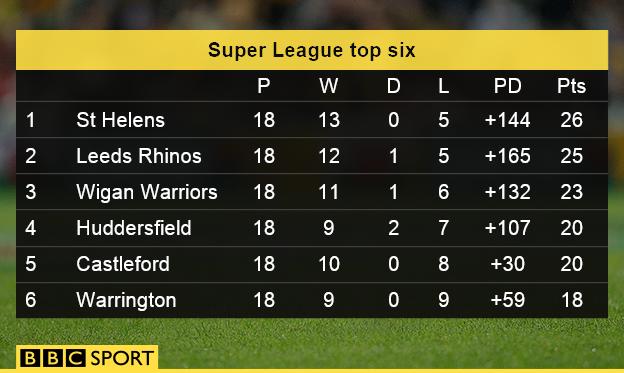