Reigning champions Saints have lost all three matches they have played since the start of the Super 8s and have slipped to fourth in the table.

The Giants let slip an eight-point lead to trail 22-20 with 20 minutes to play.

But wingers Jermaine McGillvary and Aaron Murphy crossed to seal victory at Langtree Park and lift Paul Anderson's side up to third in Super League.

The two regular-season meetings between the teams had been tight affairs settled by three points and one point respectively, both in St Helens' favour.

This was another close contest, although this time it was Huddersfield that came out on top, strengthening their hopes of a top-four finish and ensuring a nervous month ahead for their beaten opponents. 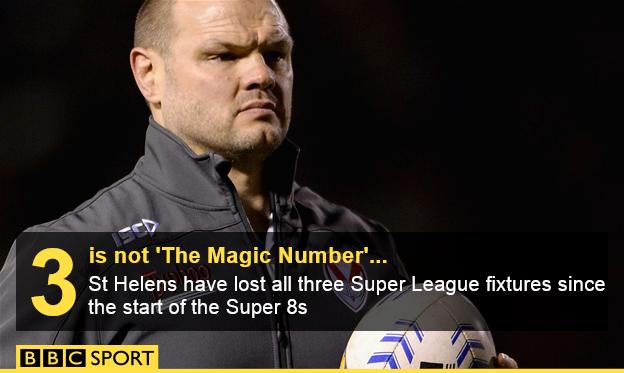 St Helens prop Kyle Amor powered over for the first of his side's four tries, but Jamie Ellis sidestepped his way through and Ukuma Ta'ai collected Danny Brough's pass to put Huddersfield 12-6 ahead.

Brough's penalty stretched their lead further, but they could not withstand sustained Saints pressure before half-time.

Having conceded six penalties in quick succession and also having lost Michael Lawrence to the sin-bin following a team warning, Huddersfield's defence was eventually breached by hooker James Roby.

Tommy Makinson marked his return from a two-month injury absence with a try in the corner following Mark Percival's break, before Percival's superb offload created a try for Travis Burns.

A kicking error by Brough presented Luke Walsh with a simple kick at goal, giving the hosts a two-point lead.

But they could not hold on, as McGillvary touched down for his 10th try in seven matches and then Murphy strolled over from Wardle's excellent pass.

"It's a result-based industry and we need to pick some points up, but I thought the response was pretty good. If anything, the effort across the board was too good because they tried to force things instead of being patient and trying to build pressure.

"It was a hell of a lot better than the Hull game. There were some really good efforts out there. We played a little bit anxiously because we've lost a few games at an important time but I'm happy with the response.

"The season is a long way from being over. We've got to make the top four and we'll have a crack at it."

"I thought it was a fantastic game. Both teams had chances to put the game to bed.

"We've come to St Helens and beaten a team that's above us in the league.

"We've competed against some of the big boys this year and probably not come away with the right result. Today we competed and came away with a result."