With 14 Grand Final rings and four Challenge Cup medals between them, Jamie Peacock and Kevin Sinfield are already assured of their places in rugby league folklore.

However, the perfect ending still awaits the Leeds Rhinos pair in their final season with the Headingley club.

Peacock is bound for a football manager role at Hull Kingston Rovers, while Sinfield will switch to rugby union with Leeds-based Yorkshire Carnegie.

As their Rhinos careers wind down, the potential treble of a League Leaders' Shield, Super League Grand Final and a Challenge Cup is a huge incentive for the duo to bow out at the top.

Saturday's Challenge Cup final with the aforementioned Rovers is the first opportunity to keep alive that ambition, and secure back-to-back Cup wins for Leeds for the first time since 1977-78. 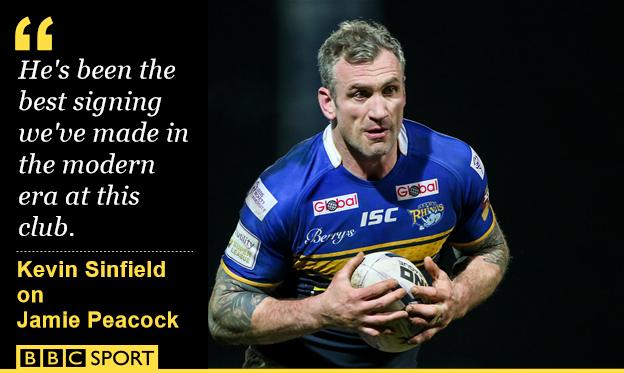 Fate has brought Peacock the ultimate farewell to the Challenge Cup - a final against his future employers. The powerhouse prop, 37, will swap boots for suits in his new role next term, not before completing his playing duties for the Rhinos.

Jamie Peacock: "For me it's business. I play for Leeds Rhinos, there is zero sentiment going into this game.

"I'm going there to win for Leeds Rhinos and I'm really pleased for Hull KR they're there for that game but I want to win at Wembley."

The prospect of ending their rugby league careers with a treble of silverware - last accomplished by St Helens in 2006 - could easily place pressure on their respective shoulders.

But with more than 1,000 games between the pair, there is an enthusiasm and freshness heading into their final straight.

Kevin Sinfield: "I feel free. In the last six to eight weeks, I've enjoyed my rugby as much as I've ever done.

"Some of that is the style of rugby we're playing, and the team we're in, but also because I'm excited what's to come.

"It was Jamie that planted the seed in my mind that it's the last time you play here and there, it's freed me up. Instead of worrying what might be, go and make it happen." 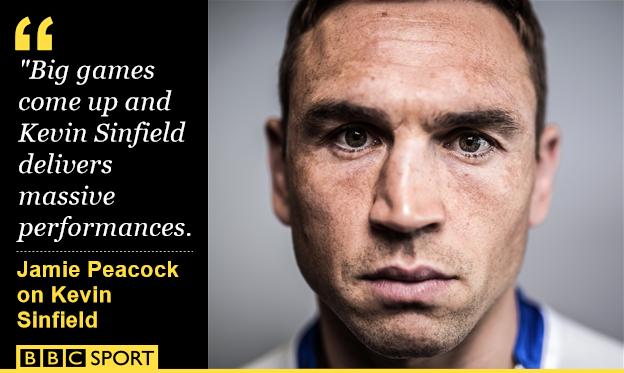 Peacock: "I've been trying to think of anything similar in my career, the only time I can compare it to was 2005 when I was finishing with Bradford Bulls.

"The last three games were 'do or die', you wanted to win regardless of anything and there is that pressure but you are enjoying the moment.

"I want to leave my best performance yet for this Saturday, the final one to be the best one I've had.

"I've no worries going into the back end of my career, I'm highly motivated with a great team and the opportunity of silverware on all three fronts.

"You only get one chance to make a last impression. When you've got a cause more than just winning or getting two points, I think it makes you play better."

Even Leeds' remarkable feats thus far, such as winning the Grand Final from a final position of fifth for two seasons running, would be overshadowed by winning the treble.

Last season's Challenge Cup success against Castleford ended a miserable run for Leeds after five consecutive final defeats but their league campaign faltered afterwards, slipping out of the play-offs at the first hurdle with defeat by Catalans.

The Rhinos will be looking for consistency and stamina in their pursuit of the treble, and the potential to keep the Challenge Cup for another season.

Sinfield: "Whether you've been here 10 years or it's your first season, everyone's aware of the opportunity, you realise the history of the club and where we've been - we know what this next two months could look like.

"For the next six weeks, we've never had an opportunity as a club like this before.

"What is available to us if we can be good enough is huge, so I don't want to take my eye off the ball."

Peacock: "It would be great if we could do that. I think we've got a huge challenge in front of ourselves with Hull KR.

"We've got a tremendous amount of respect for them as a team and some of the players they've got are outstanding.

"We know what's in front of us, if we're able to do it. It's a fair effort considering where we've been in the Challenge Cup previous to 2014."

Neither player is a stranger to the big Challenge Cup occasion, having totalled 12 final appearances between them, six of them featuring Sinfield as captain.

That experience could prove crucial in the potential battle with the emotions of a last Wembley appearance.

Peacock: "It won't be difficult at all. I use emotion at times on the field, but this is about executing a game plan ruthlessly and that's what we've been good at this year - busting a gut for each other.

"We've played some attractive football but we've done that off the back of being exceptionally tough."

Both players established early links with the Challenge Cup as youngsters that have been further reinforced as players.

Sinfield led his Oldham schoolboys team to victory under the old twin towers in 1992's final curtain raiser, while Peacock was a regular visitor as a spectator in his youth.

Sinfield: "It was a defining moment for me, at 11 years old, to captain a team and win at Wembley.

"It was then - having played on the field, sitting down to watch Wigan v Castleford, in awe of the players, looking round the stadium with 70,000 there - I thought 'I could actually do this for a job'.

"From that moment, I wanted to be a rugby league player."

Peacock: "I've always loved the Challenge Cup. When I was growing up, that was the one big competition to win.

"It evokes a lot of childhood memories for me, My first experience was as a fan. Stanningley was my amateur rugby league club and they used to take everybody down on a bus.

"I was six or seven years old going to watch the game. It was a great day out back then in the 1980s."