With only two points separating the teams at kick-off, the Giants survived conceding two early tries to fight back to lead 24-10 at the halfway stage.

Tigers came back after half-time with two scores to narrow the gap to four.

The Tigers made a flying start when the lively Luke Gale danced across after repeat sets and Ben Roberts's slippery run put Ashley Gibson in at the corner for a second. 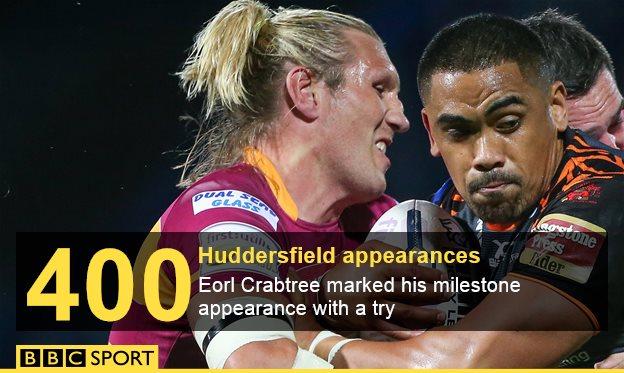 Mike McMeeken's sin-binning for a trip on Joe Wardle turned the game in the Giants' favour, as the hosts racked up 20 unanswered points with him off the field.

Craig Huby popped a pass to Ukuma Ta'ai who strolled through a huge gap and, after he took a high tackle, Jermaine McGillvary smashed his way through on the right after a smart switch by Wardle.

McMeeken returned to the field but even with a full complement, Aaron Murphy went in off Wardle's cut-out ball to finish the half with a flourish.

Again Castleford came back after the break as Luke Dorn finished a sliding shift to the left and a Murphy knock-on was punished direct from the scrum by Roberts's scything run to score.

However Giants regrouped as Wardle swept across out wide and Ellis powered through to ease the nerves.

Crabtree's 400th game was capped by a late score that maintained the Giants' grip on a top four spot at the expense of the Tigers despite Denny Solomona's breakaway effort.

Huddersfield head coach Paul Anderson: "I thought we were pretty average to be honest. There was every emotion going.

"In patches we showed some brilliance and some of the tries we scored were ridiculous but there was also some stupidity. There were some real good things in there but some we need to work on.

"It's two points which I'm really happy with and we're four in front a very spirited Cas. We're third and we've got to make sure we stay there, it's semi-finals all the way home now."

Castleford head coach Daryl Powell: "The [Justin Carney] disciplinary is coming to a point where it will hopefully be finalised. For us, we've moved on, we're getting on with it. It's about the players who are on the field and the people that are important to us.

The boys are pretty disappointed about the result but the unity of the team is pretty evident to see. We had a bit of illness in the camp as well - Olly Holmes couldn't play and Adam Milner had not trained all week until yesterday - but the boys were awesome. It was a pretty special effort in the circumstances.

"The points scored when we were a man down completely flipped the game. We were defending pretty well and causing them problems when we got into good field position. I thought they deserved to win the game but the final scoreline was a bit harsh."