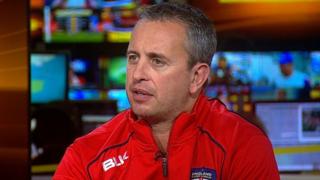 England rugby league coach Steve McNamara tells BBC Sport he has "so much sympathy" for cross-code counterpart Stuart Lancaster after his union side were dumped out of their home Rugby World Cup in the pool stages.

McNamara says being national coach is a "great position" but comes with "added pressure", which he will experience when his England side take on France and New Zealand in their International Series, starting on 24 October.