Giants led Castleford with 11 minutes remaining but lost by four points, having also slipped to a loss against Salford by two points on Monday.

Actor Bill Murray was the star of the 1993 film, where his character lives the same day over and over again.

"I feel like Bill Murray at the moment," Anderson told BBC Radio Leeds.

Recent years have seen Huddersfield emerge as a model of consistency during the regular season, with three consecutive top-four finishes including a League Leaders' Shield.

"If you go back over the last two or three months of the season, it is what it is - we gifted possession and came up with some errors," added Anderson.

"Our errors are our downfall and it robs us of energy. When you're in our position you have to build energy rather than taking it away from ourselves." 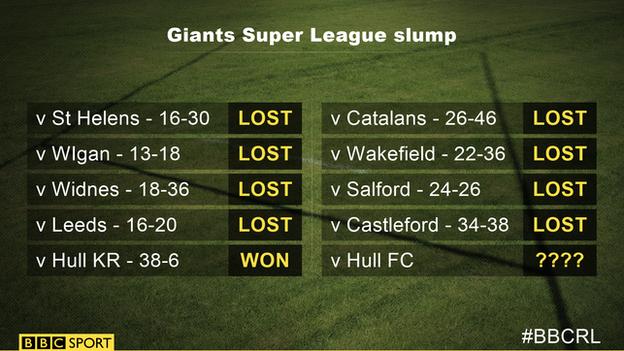 Anderson succeeded Nathan Brown at the Giants, after the Australian took up his St Helens contract early, and delivered silverware in his first season in charge.

But the former Saints, Leeds and Bradford prop accepts his position is not guaranteed with the club bottom of the table.

"Of course I feel pressure, this is not a position I'm proud of," he said.

"We've been a very consistent winning team over the past few years and this is hurting. It's hurting me as much as anyone and I know it's hurting the players.

"Pressure is pressure. You feel it every day as head coach."