Wigan and England full-back Sam Tomkins has vowed not be a 'weak link' when he returns from his long-term injury.

Tomkins has not played for nine months after suffering a knee injury playing for New Zealand Warriors.

"I'm glad it's finally come to the time to get my boots on and get out there," he told BBC Radio Manchester.

"I've been training now with the boys for three or fours weeks. The last week has been full training and once you're in that and feel good it's tough to not put your hand up and play.

"The first few months were very tough - obviously when I signed back last year I didn't think I'd be sitting on the sidelines.

"It ended up doing a bit of helping out with Lewis Tierney at full-back and that gave me a bit of a focus, but the last month has flown by once I started training." 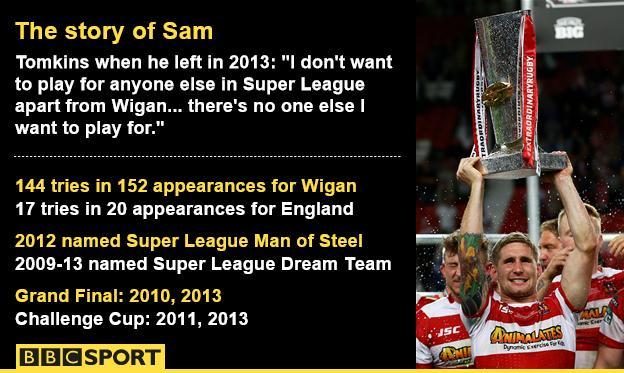 Tomkins spent two years at NRL side Warriors, but cited homesickness as one of the factors for his return to Super League.

"I'm realistic," he added. "I'm not going to be coming out on Friday and be absolutely flying and in my best form.

"It's not the case of as soon as you're fit you're in your best form, that might take a while, but I can certainly add something to the team, I'm not going to be a weak link."