After 23 rounds of Super League and Championship action, it is time for the Super 8s.

Now in the second season of this format, the 12-team top two leagues have split into three groups of eight - Super League, the Qualifiers and Championship Shield.

Champions, promotion, relegation and who will fight it out in the 'Million Pound Game' for a place in Super League will all be decided across the newly-formed three leagues.

One thing that is for certain is there will be a new champion, with last season's treble winners Leeds consigned to the Qualifiers after they finished ninth in Super League.

Here BBC Sport explains what will happen over the next two months of rugby league.

The top eight of Super League, who all keep their accrued points, will now compete for a top-four finish to enter the play-offs, and the chance to reach October's Grand Final at Old Trafford.

St Helens occupy fourth, with Catalans and Castleford chasing them, while Widnes and Wakefield complete the top eight after competing in the Qualifiers last year. 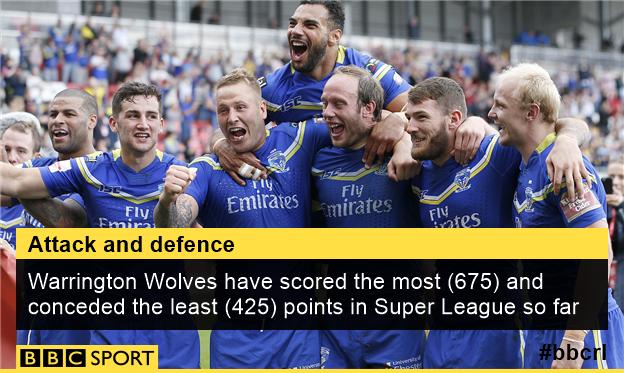 The Qualifiers, often referred to as the Middle 8s, will contain Leeds, Salford, Hull KR and Huddersfield who finished in the bottom four of Super League.

Championship winners Leigh Centurions, who have not been in the top flight since 2005, London Broncos, Batley Bulldogs and Featherstone Rovers make up the other teams.

After seven rounds, the top three in this middle league automatically secure a Super League spot for next season, with the sides lying fourth and fifth facing each other in a one-off play-off match - the Million Pound Game - to determine next year's final top-flight team.

The Championship Shield consists of the remaining eight teams in the Championship, which features a top-four play-off and the bottom two clubs dropping into League One.

From treble winners to facing part-timers

In October 2015, Leeds were regarded as one of the finest teams in history, having become only the third team to have won the Challenge Cup, League Leaders' Shield and Grand Final treble.

Fast forward to this year and the Rhinos have spent the majority of the campaign at the bottom of the table and struggled for wins.

Leeds fans will be grateful they have found some form recently - they have won five of their last six games - but they will now play for the right to be in Super League next year.

"It has been tough, very tough for us," centre Kallum Watkins told BBC Sport.

"We've not finished teams off or we've been really poor and that's down to us as a group - this is a result of not performing well consistently enough.

"It's a big learning curve for everyone involved in the club, the past few years have been really successful but we're in a position now where we've been through adversity.

"Obviously it is a different challenge but we have to go into it with respect to the other teams, we know how tough it will be."

Beneath the top tier, Leigh Centurions have reigned supreme in the Championship. They have lost only once in the league in 2016 and won the title for the last three seasons.

They struggled in the Qualifiers last year as they won only one game but this time around they have added proven performers including Mitch Brown, Travis Burns and Danny Tickle.

"You can look throughout our team and there is a lot of quality, you don't get those players and retain those players when you act part-time," head coach Neil Jukes told BBC Radio Manchester.

"We're all but Super League in name in terms of what we do from a Monday to Sunday.

"If we get up there we'll rise to the challenge and get into the mix."

Life as a semi-professional

Away from the elite end of the sport, part-time sides Featherstone Rovers and Batley Bulldogs have squads where rugby league does not provide the players with their main income.

"I had 16 years full-time in Super League and to coach the blokes part-time, I've gone from 20 hours a week to sometimes four or five hours," said Rovers head coach Jon Sharp.

"I have to think about what they have been doing and what type of jobs they have so I know how hard I train them, and how much energy they have for the weekend."

Former Hull FC and Featherstone forward Sharp, who was head coach at Huddersfield in 2008, took charge at the start of the season.

"It's probably a greater challenge as you have to prioritise and be more efficient in your coaching," he added.

"We have had an electrician who was working in Ireland all week and never trained until Saturday morning but rocked up on Sunday and had a great game.

"At times it is frustrating and if I had any hair I'd pull it out, but that is part and parcel of having a part-time club."

Watch highlights from Super League and The Qualifiers on BBC's Super League Show every week, and read match reports from every game in the top two tiers of the Super 8s on the BBC Sport website.