"To be told you have brain damage is really hard to hear," says former Australia international Ian Roberts.

"I was fully aware there was something wrong with me, but to be told I had scarring on the brain was surprising. It's irreversible damage."

Roberts, 52, is one of 25 retired National Rugby League (NRL) players who took part in a study into the effects of repeated concussions on the brain.

The study, published on Thursday, found repeated head injuries suffered during the players' careers had left them with long-term impairments.

The NRL said it was "aware of the study" and added it "takes concussion seriously and is continuing to adopt international best practice in concussion management".

Roberts said: "Players need to be aware so they can make their own, informed decision.

"They need to know the consequences of repetitive concussions, because there's a price to pay."

Former Huddersfield scrum-half Robinson, who retired in 2016, says he was knocked out at least 30 times playing rugby league.

Both he and Brown said the game was getting to grips with head injury protocol, making it much safer for players now beginning their careers.

'I was struggling to learn my lines'

Roberts won 13 caps for Australia during a 12-year playing career - which included a stint in England at Wigan - and is no stranger to confronting a taboo issue.

In 1995, then aged 30, he became the first high-profile rugby league player to publicly reveal he was gay.

After retiring from the sport in 1998, the front rower began an acting career - something he says has been affected by his brain damage.

"I've had some complications with my mental health since retiring from rugby league," he told BBC Sport.

"My first major concussion was in my early teens, and when I turned professional I was knocked unconscious on 14 separate occasions.

"In the last five years I've noticed my recollection of things has slowed down and my memory isn't as sharp as it was. I first realised it at rehearsals for plays because my ability to learn lines has deteriorated. I'm just not as sharp as I was in the past."

How did the study work? 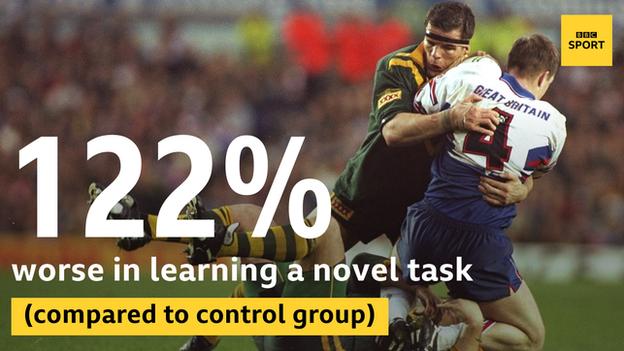 Roberts says he agreed to take part in the study to find out if his symptoms were a direct result of playing rugby league.

The research, conducted by concussion expert Dr Alan Pearce, studied 25 former NRL players and compared them with 25 men of a similar age with no history of concussion or brain injury.

"The objective of the study was to look at how the players have fared 20 years after their last concussion in a competitive rugby game," Pearce said.

"When we compared them to the healthy group, who were matched for educational level, there were a number of differences.

"I would have expected the players to outperform the control in the learning of a novel task due to the way they have trained as athletes, but they really struggled in learning new material."

'We need to be optimistic'

Pearce and Roberts share the same outlook on the outcome of the testing - they are optimistic.

"This shouldn't be seen as a death sentence," Pearce said.

"I don't know whether we can stop the decline completely, but at least if we can slow it, then we can provide a number of years of good quality of life."

Roberts has been doing brain rehabilitation - in the form of cognitive training - for the past few years, and he believes it is helping.

"Just knowing this information is empowering," Roberts said. "I'm much sharper now after the cognitive training than when I was just sat there worrying about it.

"Now it's about trying to stay positive and taking responsibility for your own health.

"I can't live in the past thinking what should have been done by the sporting body itself. I have to move forward from this and improve my mental health."

What is sport doing about concussion?