Filo Tiatia will leave his coaching role at the Ospreys at the end of the season to become forwards coach at Japanese side Toyota Verblitz.

The 39-year old, who quit playing after winning the Magners League Grand Final last season, will end a five-year association with the Welsh region.

"It allows me to make the next step in my coaching development," said Tiatia.

"I'll take away some great memories from my time as an Osprey. It's been a fantastic time."

The former New Zealand international and Wellington back-rower joined the Ospreys from Toyota Verblitz in May 2006 and helped inspire the Liberty Stadium region to Magners League crowns in 2007 and 2010 and 2008 EDF Energy Cup success. 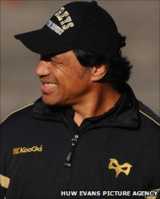 I'm very sad to be uprooting my family and moving on from Swansea and the Ospreys,

In his 99th and final game for the Ospreys, Tiatia helped the Welsh side to Magners League Grand Final glory over Leinster in Dublin in May 2010.

The All Black started his coaching career as Swansea defence coach before becoming coach with the Ospreys Elite Youth Development programme.

Now he returns to Top League side Toyota Verblitz before the Japanese season starts in the summer.

"I wouldn't have left the Ospreys for just any club," said Tiatia.

"I'm going back to Toyota, another club that I have strong links and a real connection with having spent four years there prior to joining the Ospreys.

"It is an organisation and a place that I'm familiar with and having been fortunate enough to enjoy some fantastic experiences as a coach with the Ospreys, this move will provide me with another excellent opportunity to develop my coaching further."

"Filo has been a tremendous servant to the region in his time here and obviously we will be disappointed to see him leave at the end of the season," said Hore.

"He has been an asset to the organisation on and off the field.

"As a young coach he has learnt the ropes on the Ospreys coach development pathway over the last four years, having a huge influence on the next generation of Ospreys, and will definitely leave his mark on the organisation."