Leicester coach Richard Cockerill says his side rose to the occasion and defied the critics to seal a place in the Premiership play-off final.

The Tigers overcame Northampton 11-3 in a hard-fought semi-final at Welford Road on Saturday.

Cockerill told BBC Radio Leicester: "We've been under a bit of pressure and everybody keeps talking about everybody else, because they want us to lose.

"But on the big day, this group of players have turned up and performed."

Two Toby Flood penalties and a late Alesana Tuilagi try were enough for Leicester to overcome Saints in a tight encounter.

The Tigers will now face Saracens at Twickenham on Saturday 28 May after they beat Gloucester 12-10 in Sunday's other semi-final at Vicarage Road.

And Cockerill believes there is still more to come from his side.

He continued: "This is a quality side and we've not played to our potential yet - even now.

"Write us off if you want, but you'd be a fool to do that because on the day, we've proven for a long, long time that we can turn up and play.

"We've got ourselves in a position to win the tournament and that's what we wanted that nine months ago. We're in the final and we've got a chance of wining it."

Cockerill reserved special praise for the work rate of his half-back pairing of England internationals Ben Youngs and Flood.

Cockerill said: "Toby and Ben have had their fair bit of stick, but they're very good players and they played for their team mates.

"They made mistakes but they worked really hard for the team first and foremost. They weren't worried about world cups or England places or anything else, all they wanted to do was graft and do their best for their team mates.

"Credit to them, because it's not easy to have that sort of focus all the time and I think that makes them very special players."

And Leicester and England fly-half Flood believes his side's mental and physical edge were the key to the victory.

"A lot of things have been said about the fact that big teams have turned us over here so it was important our mindset was good," said Flood.

"We went out there and we impressed, certainly in terms of our physicality around the breakdown and I think we fronted up which is very important against Northampton.

"When they get on the front foot and when they get over the gain-line they're certainly a very dangerous side, but we tried to snuff that out at the source and at times we did that."

It is set to be a big year for Flood, who is likely to be a focal point of England coach Martin Johnson's plans for the world cup in New Zealand in September and October. 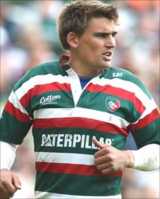 Northampton ran us very, very close but ultimately Leicester expect to be in a final

But Flood is used to high levels of expectation at Leicester, where he says reaching and winning finals is normal practice.

"Northampton ran us very, very close but ultimately Leicester expect to be in a final," he said. "I don't mean Leicester in terms of us [the current squad]; I mean the club, the surrounding, the supporters.

But Flood says his side will not being complacent in the fortnight before the final showdown, where they could seal their third consecutive title.

"It's not a dressing room where we're congratulatory and patting each other on the back," he added. "The job's not done."