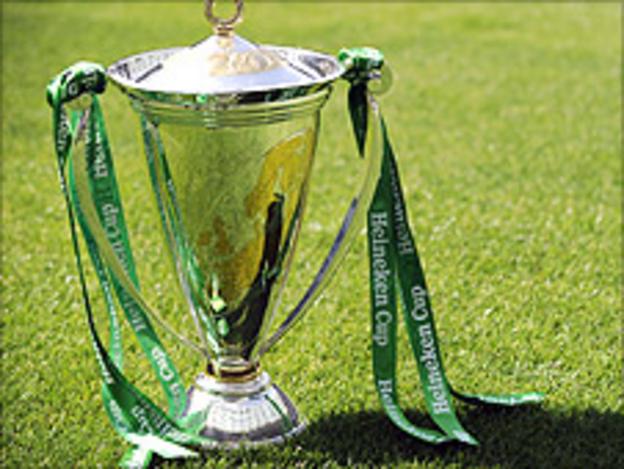 The Scarlets look to have the toughest test in next season's Heineken Cup, after being drawn in Pool One with Munster, Northampton and Castres.

Cardiff Blues have London Irish, Edinburgh and Racing Metro standing between them and the quarter-finals.

The Ospreys, meanwhile, will face Saracens, Biarritz and Benetton Treviso in Pool Five.

The Heineken Cup first round will get underway on 11 November, later than usual because of the World Cup.

Scarlets coach Nigel Davies says his side must concentrate on turning Parc y Scarlets into a fortress if they are to advance.

"The key thing to getting out of this group is winning at home, we realised that last season and we just slipped up against Leicester," Davies said.

"I don't think any of the teams in the Pool will be happy but we will all think we are good enough to beat each other. One thing is for sure, there won't be two teams qualifying out of this Pool.

"I firmly believe the talent we have developed is good enough to compete at this level, but the players have to believe in themselves.

"We know all about Munster, and Northampton Saints obviously reached the final last season and we know from years of travelling to France that going to Castres will be very difficult.

"It is going to be very challenging for us but I think we are going to improve from last season."

Ospreys director of coaching Scott Johnson said he was looking forward to the challenges posed by a strong set of opponents.

"The Heineken Cup draw always sets up some intriguing ties and it's no different this year," Johnson said.

"We're up against some very good teams and we're looking forward to a real arm wrestle. We know what each opponent is about and there should be some great games for the fans next season.

"We pushed Biarritz all the way out in San Sebastian last year [losing 28-29 in the 2009/10 quarter-finals] and maybe could have pinched it at the death, while Saracens have just won the Premiership title in England - they beat Leicester at Twickenham last weekend with a really brave performance.

"Then we've got Treviso, a team that had an excellent home record last season and sent away quite a few good teams with their tails between their legs, so although we've won out there we realise how difficult it will be.

"It's a fantastic competition and seeing the draw really whets the appetite for next season. We've got an excellent home record in this competition that we'll want to protect, then it will be about going to these places and really performing for the shirt."

Blues back coach Gareth Baber says they must live up to the billing as Pool Two's top seeds and improve significantly on last season's disappointments that included home and away defeats by eventual losing finalists Northampton.

Baber said: "As a squad last year we feel we underachieved so we've got a lot of work to do make sure that if we do get our top seed billing that we live up to it and we work hard to make sure we progress from the pool.

"We had some good victories, certainly through the season, but when we came up against Northampton in that back-to-back pool games we didn't manage to deal with the physicality that they brought.

"That is certainly something that Racing will bring to us and the likes of London Irish and Edinburgh and we've just got to get some more consistency in our game and improve on our try-count."